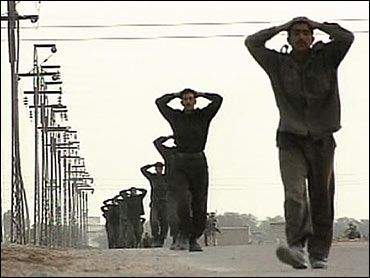 Hordes of Iraqi soldiers, underfed and overwhelmed, surrendered Friday in the face of a state-of-the-art allied assault.

These were not the fabled and well-fed Republican Guardsmen who anchor Saddam's defense — these were a rag-tag army, many of them draftees, often in T-shirts. Their handguns and small arms could accomplish little against opposing forces wielding 21st century weaponry.

"I kind of felt sorry for them," said one U.S. military official, speaking on condition of anonymity. "A lot of them looked hungry. They haven't been fed in a while."

He spoke after U.S. Marines and their allies took control of the strategic port city of Umm Qasr and with it, Iraq's access to the Persian Gulf. The out-classed Iraqis fought with small arms, pistols, machine guns and rocket-propelled grenades.

As CBS News Correspondent Mark Phillips reports, U.S. Marines were being greeted if not with garlands then at least with handshakes, by residents of the town of Safwan in the deep southeast corner of Iraq. This area populated by Shiites has no great love for Saddam Hussein and the rulers in Baghdad who come from the rival Suni sect of Islam and who brutally put down a rebellion here after the first Gulf War.

Authorities said the nation's southern oil fields would be secured by day's end.

At the same time, the Army's 3rd Infantry Division surged 100 miles into Iraq. Much more was to come — an extraordinary land-based armada of allied weaponry and troops was caught in an enormous traffic jam in Kuwait, ready to strike when it could cross the border.

But often, the opponent advanced with a white flag in hand, instead of a rifle.

Within a few hours of crossing into southern Iraq, the 15th Marine Expeditionary Unit encountered 200 or more Iraqi troops seeking to surrender. One group of 40 Iraqis marched down a two-lane road toward the Americans and gave up.

Another group of Iraq soldiers alongside a road waved a white flag and their raised hands, trying to flag down a group of journalists so they could surrender.

Forty to 50 Iraqi soldiers surrendered to a Marine traffic control unit. They came down the road in the open back of a troop vehicle, their hands in the air for about a mile before they reached the Marines.

Their decision to give up the fight was not unexpected, or unprompted; for months, Iraq has been bombarded with messages from the Americans, urging its soldiers to refuse to fight.

This war is being characterized as a war of liberation, not conquest, and images of Iraqis helping American soldiers destroy images of Saddam will help. But images of U.S. soldiers taking down the Iraqi flag to raise Old Glory won't. The Iraqi flag was soon put back up.

And if there was any question whether some units of the Iraqi military would fight, it was answered on the first night. Their fire was returned with interest and a covering artillery barrage was called in, reports Phillips.

There were pockets of resistance, some of it stiff; a second combat death was reported Friday, a member of the 1st Marine Expeditionary Force who was wounded while battling a platoon of Iraqi infantry.

However, the U.S. military continues to encourage Iraqi soldiers to surrender rather than risk annihilation fighting to defend Saddam.

At a Pentagon news conference Friday, Secretary of Defense Donald H. Rumsfeld called upon Iraq's military to "do the honorable thing, stop fighting that you may live to enjoy a free Iraq, where you and your children can grow and prosper."

How many Iraqis had surrendered? No one knew for sure. Rumsfeld said he knew of a few hundred, and others who just quit fighting. "A lot of people just leave and melt into the countryside," he said.

Rumsfeld said the allied forces were advancing, and now controlled "a growing portion of the country of Iraq." The captured territory included two airfields in western Iraq.

The ground advance into Iraq appeared to be moving faster than planned. Units reached locations in Iraq 24 hours ahead of their expected arrival time, according to several reporters attached to those units.

The Army's 3rd Infantry Division was following a path through the desert west of the Euphrates River, avoiding populated areas. It appeared that strategists sought to minimize civilian and military casualties by flanking most Iraqi units, and going straight for the Republican Guard around Baghdad.

The bulk of the allied force hadn't even entered Iraq yet.

There was a huge traffic jam at the border — thousands of vehicles parked in parallel rows, nothing but columns of trucks, humvees, oil tankers, flatbed tucks, armored vehicles and vehicles of every stripe, from horizon to horizon. The traffic was so bad that it took 6½ hours for one unit to go 51 miles, in swirling dust.

The battalion passed the brown, stone rubble of several buildings it had shelled just minutes before — the air still held the acrid smell of explosives — and at least five enormous pictures of a smiling Saddam Hussein, some with him wearing a robe, others with him in a headscarf, that stood intact at the border post.

They reached the town of Safwan, where speakers warned Iraqis to stay out of the Marines' way. A few ventured outside: A man on the side of the road bearing a white flag. Another in a long, gray robe, prostrate on the ground, apparently in prayer.

"I never thought I'd see this place," said Cpl. Matt Nale, 31, of Seattle, Wash. He stuck his head out of the top of an Amtrack armored personnel carrier, looked around, smiled and repeatedly nodded with wonder.

The Marines later took control of positions mostly abandoned by Iraq's 32nd Mechanized Infantry Brigade, blowing up a few abandoned tanks and armored personnel carriers and engaging in short firefights with a few Iraqi soldiers who had stayed back to defend their headquarters and barracks or were unable to flee in time.