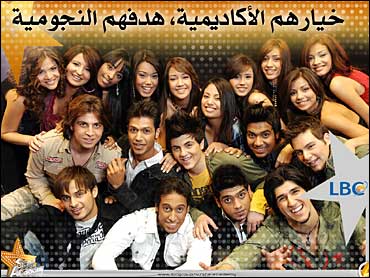 For four long years, life has been brutally unkind to most Iraqis, but Friday night they had one of those rare moments to focus beyond the daily violence that is swallowing their lives. One of their own took first prize in the Arab version of American Idol.

In Baghdad, a city that becomes deserted and plunges into darkness after nightfall, residents who had electricity to watch televisions celebrated with gunfire that briefly pierced the quiet just before midnight.

Wearing a turquoise evening dress, Shadha Hassoun, wrapped herself with the white, red and black flag of Iraq and broke into tears as fans swarmed the stage in Beirut, Lebanon, where the contest was held and broadcast live throughout the Middle East.

"Her triumph will show the world that Iraqis will still sing despite their wounds," Israa Tariq, a homemaker from Baghdad's al-Ghadeer neighborhood, said before Friday's final episode.

Hassoun's run to the final in what is perhaps the Arab world's most watched TV entertainment program coincided with a particularly painful time in Iraq.

More than 500 people had been killed in the last six days alone. Most of them perished in a series of horrific suicide bombings targeting busy markets and in a sectarian massacre where innocent men were dragged out of their homes and shot execution-style.

Dubbed the "Daughter of Mesopotamia" by fans, Hassoun has for weeks served as a pleasant distraction for a people in year five of a war that harvests scores of Iraqi lives each day.

With a nighttime curfew in force and the streets too dangerous after sundown, Iraqis have been finding refuge in the wide variety of TV channels provided by satellite dishes, banned under Saddam Hussein but now sprouting on nearly every rooftop.

Iraqis have been glued to their TVs each Friday since December, eagerly monitoring Hassoun's progress in the "Star Academy" contest that is produced by a Lebanese satellite channel.

Hassoun, a 25-year-old brunette who has lived most of her life outside Iraq, outpaced three other finalists — men from Egypt and Lebanon and a woman from Tunisia.

Television viewers across the Mideast voted for their favorite performer by e-mail and text-messages to the satellite channel.

Iraq's al-Sharqiyah satellite channel devoted hours of live coverage Friday, urging Iraqis to vote for Hassoun and broadcast a phone-in program for her supporters. Some fans called to say they had voted for Hassoun so many times they had used up the credit on their prepaid phone cards.

"How beautiful we, Iraqis, can be when we are united," said one caller, alluding to the support Hassoun received from her countrymen and women of all ethnic and religious backgrounds.

Al-Sharqiyah also sponsored a gathering of hundreds of Hassoun fans in the Kurdish city of Irbil, where fans carried banners and portraits of the young Iraqi and watched the contest Friday night on a giant outdoor television screen. The crowd erupted in jubilation when the Lebanese host of the show announced Hassoun had won.

A similar gathering would have been impossible to organize almost anywhere outside the Kurdish region, possibly the safest place in Iraq. However, al-Sharqiyah could not keep the minds of viewers off their troubles at home for long.

During commercial breaks, it aired a government ad that seeks to discourage sectarian cleansing. It shows an elderly woman in a black chador in tears and pleading with masked gunmen not to evict her and her family from their home.

Images of Hassoun, who has a Moroccan mother and an Iraqi father, have for days appeared in front page newspaper ads by a local telephone company. News of her progress on the show have for weeks been a fixture in the entertainment pages of most Iraqi newspapers.

Hassoun captivated Iraq the same way the country's soccer team did with its dream run in last year's Asian Games, when it reached the final but lost to its Qatari hosts. With every win on the road to the final, Iraqis celebrated with intense celebratory gunfire in Baghdad.

"She is the daughter of the land of two rivers. The daughter of one Iraq," Baghdad student Ali Yahia said of Hassoun. "Every Iraqi will hold his head high when she wins."

Ziad al-Qaisi, a 31-year-old clerk from Baghdad, saw Hassoun's triumph as a message to all Iraqis to abandon violence and shift their energy to something constructive.

"Iraqis should focus on art, music and sports where they can find love, beauty and tranquility."

But not everyone in Iraq watched as Hassoun sang her way to the final in Arabic, English, French and Spanish.

"I wish Iraqis would instead pay attention to the more pressing issues in Iraq and try to find a way out of our tragedy," said physical education postgraduate student Ibrahim Abdullah from Baqouba — an enduring Sunni insurgent stronghold northeast of the capital.