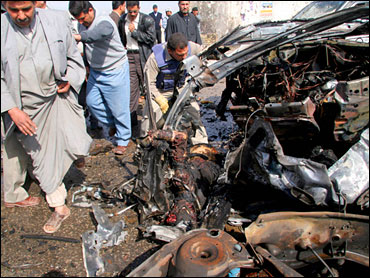 Insurgents exploded a truck carrying chlorine gas canisters Wednesday — the second such "dirty" chemical attack in two days — while a U.S. official said ground fire apparently forced the downing of a Black Hawk helicopter. All nine aboard the aircraft were rescued.

Thunderous explosions reverberated through Baghdad after midnight as the security crackdown in the capital entered its second week.

The rash of spectacular insurgent attacks offer a sweeping narrative on evolving tactics by Sunni militants who have proved remarkably adaptable.

Military officials worry extremists may have recently gained more access to firepower such as shoulder-fired anti-aircraft rockets and heavy machine guns — and more expertise to use them. The Black Hawk would be at least the eighth U.S. helicopter to crash or be taken down by hostile fire in the past month.

Lt. Col. Christopher Garver, a U.S. military spokesman, said initial reports indicated the chopper was brought down by "small arms fire and rocket-propelled grenades" north of Baghdad, but gave no further details. All nine aboard were taken away on a rescue helicopter, he said.

On Tuesday, a bomb planted on a chlorine tanker left more than 150 villagers stricken north of the capital. More than 60 were still under medical care on Wednesday. Chlorine causes respiratory trouble and skin irritation in low levels and possible death with heavy exposure.

In Washington, two Pentagon officials said the tactic has been used at least three times since Jan. 28, when a truck carrying explosives and a chlorine tank blew up in Anbar province. More than a dozen people were reported killed.

A third Pentagon official said the United States has been concerned about Iraqi militants' ability to get weapons like chlorine bombs and use them effectively. But the official cautioned that chlorine bombs are just one threat on a long list of possible attacks that Iraqi fighters may try to carry out.

It was unclear whether the confluence of new insurgent tactics — attacking isolated combat posts, targeting helicopters more intensely and using chlorine bombs — was coincidental or in response to the U.S. troop increase.

W. Patrick Lang, a former official at the Defense Intelligence Agency, said the insurgents are always "seeking to achieve higher levels of effectiveness" and these new tactics are part of the normal "evolution of sophistication."

Lang said trucks filled with chlorine gas are "really quite deadly" because the gas is potent and spreads easily.

Some authorities believe militants could be trying to maximize the panic from their attacks by adding chlorine or other noxious substances.

"It is an indication of maliciousness, a desire to injure and kill innocent people in the vicinity," said Garver, who also predicted militants may begin to launch similar attacks because of the widespread mayhem caused by this week's chlorine clouds.

"If there is a particular success, we'll see copycats. ... They certainly pay attention to what they think is successful," he said.

In Najaf, meanwhile, a suicide car bomber killed at least 13 at a police checkpoint. The attack fit a pattern that's believed to drive much of Iraq's recent violence: Sunni militants seeking to provoke majority Shiites into a full-blown sectarian conflict that would leave Washington's plans in ruins.

It was the first major bombing in more than six months in Najaf, an important Shiite pilgrimage site 100 miles south of Baghdad and also the headquarters of radical Shiite cleric Muqtada al-Sadr, head of the Mahdi Army militia.

The Najaf blast hit while streets were filled with morning shoppers. At least seven of the victims were police and the rest civilians near a checkpoint — part of the city's security cordon that includes Mahdi Army militiamen, who battled U.S. forces in the area in 2004.

More than 40 people were wounded in the blast, which sent body parts and blood over a wide boulevard. Crews stuffed limbs and bits of flesh into cardboard boxes.

In Baghdad, another Mahdi Army center was hit. A car bombing in the teeming Sadr City district killed at least three.

A series of strong blasts rumbled through the capital in the early hours of Thursday, signaling some kind of military activity. But the reason for the explosions, which appeared to be coming from the west of the city, was unclear.

Earlier, more than 10 people died in blasts across Baghdad — adding to the more than 100 victims of bombings in attacks in and around the capital since Sunday. The toll cast a long shadow over authorities marking the first week of the U.S.-Iraqi security sweeps.

Moussawi, the Iraqi military spokesman, said the campaign to reclaim control of the city "has achieved very important goals despite the expected criminal reactions."

"God willing, the plan will continue to uproot terrorists and outlaws across Baghdad and other areas," he told a news conference. He added that 42 "terrorists" have been killed in the sweeps and more than 250 suspected militants arrested, but gave further details.

An American military spokesman, Maj. Gen. William Caldwell, told a news conference that U.S. and Iraqi forces were focusing on "belts" of extremist activity in Baghdad and suggested talks are ongoing over when and how to move into Sadr City.

It is believed that al-Sadr has ordered his forces not to challenge the security operation up to this point.

"Anytime you can find a political solution instead of a military one it is better," Caldwell said.

A U.S. Marine was killed in fighting in the volatile Anbar province and a soldier was killed by gunfire in a neighborhood of Baghdad, the military said Wednesday.

The Marine was killed Tuesday during combat operations in the insurgent stronghold. The soldier was hit by small arms fire in a northern district of Baghdad on Tuesday, a statement said without giving further details.

At least 3,149 members of the U.S. military have died since the Iraq war started in March 2003, according to an Associated Press count.