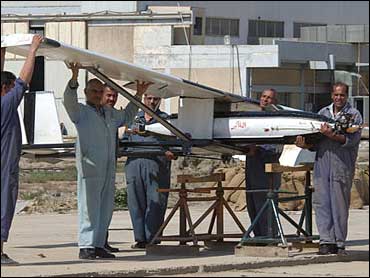 Huddled over a fleet of abandoned Iraqi drones, U.S. weapons experts in Baghdad came to one conclusion: Despite the Bush administration's public assertions, these unmanned aerial vehicles weren't designed to dispense biological or chemical weapons.

The evidence gathered this summer matched the dissenting views of Air Force intelligence analysts who argued in a national intelligence assessment of Iraq before the war that the remotely piloted planes were unarmed reconnaissance drones.

In building its case for war, senior Bush administration officials had said Iraq's drones were intended to deliver unconventional weapons. Secretary of State Colin Powell even raised the alarming prospect that the pilotless aircraft could sneak into the United States to carry out poisonous attacks on American cities.

The administration based its view on a Central Intelligence Agency finding that Iraq had renewed development of sophisticated unmanned aerial vehicles — UAVs — capable of such attacks. The Pentagon's Defense Intelligence Agency also supported this conclusion.

While the hunt for suspected weapons of mass destruction — and the means to deliver them — continues, intelligence and defense officials said the CIA and DIA stand by their prewar assertions about Iraqi drone capabilities, some of which Powell highlighted in his Feb. 5 presentation to the U.N. Security Council.

But the Air Force, which controls most of the American military's UAV fleet, didn't agree with that assessment from the beginning. And analysts at the Pentagon's Missile Defense Agency said the Air Force view was widely accepted within their ranks as well.

Instead, these analysts believed the drones posed no threat to Iraq's neighbors or the United States, officials in Washington and scientists involved in the weapons hunt in Iraq told The Associated Press.

The official Air Force intelligence dissent is noted in the October 2002 National Intelligence Estimate on Iraq's weapons programs, parts of which were declassified last month as the Bush administration tried to defend its case for war.

"We didn't see there was a very large chance they (UAVs) would be used to attack the continental United States," Bob Boyd, director of the Air Force Intelligence Analysis Agency, said in an AP interview. "We didn't see them as a big threat to the homeland."

Boyd also said there was little evidence to associate Iraq's UAVs with the country's suspected biological weapons program. Facilities weren't in the same location and the programs didn't use the same people.

Instead, the Air Force believed Iraq's UAV programs were for reconnaissance, as are most American UAVs. Intelligence on the drones suggested they were not large enough to carry much more than a camera and a video recorder, Boyd said.

Postwar evidence uncovered in July in Iraq supports those assessments, according to two U.S. government scientists assigned to the weapons hunt.

"We just looked at the UAVs and said, 'There's nothing here. There's no room to put anything in here,"' one of the scientists said.

The wingspan on drones that Iraqis showed journalists in March measured 24.5 feet and the aircraft were built like large, white model airplanes.

The U.S. scientists, weapons experts who spoke on condition of anonymity, reached their conclusions after studying the small aircraft and interviewing Iraqi missile experts, system designers and Gen. Ibrahim Hussein Ismail, the Iraqi head of the military facility where the UAVs were designed. None of the Iraqis questioned are in U.S. custody.

While the weapons hunters can't be sure they've recovered all of Iraq's UAVs, the evidence amassed so far, coupled with the interviews, has led them to believe that none of the drones are designed for unconventional weapons. Iraqis involved in the program have insisted the drones were for reconnaissance and electronic jamming.

Some UAVs were kept north of Baghdad. Weapons hunters found some drones in better shape than others with the most important finds located at a facility in the capital, the U.S. scientists said. Weapons hunters hauled them back to their base on the outskirts of the Baghdad International Airport where the parts were analyzed.

The unproven U.S. assertion regarding Iraq's UAV programs is one among many.

The lack of success in uncovering unconventional weapons, after warnings that Iraq posed an immediate danger, has led critics and some former government analysts to suggest the administration exaggerated the threat posed by Saddam.

Boyd said the Air Force's dissent was handled fairly, and that his analysts did not feel pressured to alter their position. "Our view was fully aired in the process," he said.

The Bush administration has made public some of what led it to believe the UAVs were for biological or chemical weapons attacks.

Before the war, U.S. intelligence agencies learned that officials with Iraq's UAV program tried to buy commercially available route-planning software that was packaged with electronic maps of the United States, according to the declassified portion of the National Intelligence Estimate.

This discovery was interpreted by some analysts as a sign Iraq was trying to plan UAV bombing runs over the United States. But Boyd said Air Force analysts were unconvinced because maps are frequently bundled with such software.

At the United Nations in February, Powell told the world Iraq had test-flown a UAV well beyond a 93-mile limit allowed under U.N. rules. But both reconnaissance and offensive aircraft would need to travel long distances, Boyd said.

Compared to other agencies, Boyd said the Air Force relied more on information from reconnaissance satellites and less on defectors, in accessing Iraq's UAVs.

Saddam's regime had experimented with remotely controlled jet aircraft modified for biological and chemical attacks before the 1991 Persian Gulf War, but U.N. inspectors found no evidence that program had been successful.

Boyd said attempts in the mid-1990s by Saddam's regime to convert an L-29 jet trainer into a dispersal system were abandoned. U.S. weapons hunters also studied jet trainers found in northern Iraq but found no evidence they had been converted into biological or chemical weapons carriers, they said.

These are the tanks Ukraine will get from the U.S. and Europe
Thanks for reading CBS NEWS.
Create your free account or log in
for more features.
View CBS News In
CBS News App Open
Chrome Safari Continue
Be the first to know
Get browser notifications for breaking news, live events, and exclusive reporting.