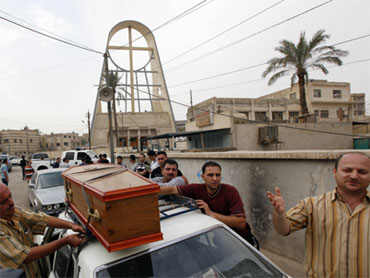 Iraq's dwindling Christian community was grieving and afraid on Monday after militants seized a Baghdad church during evening Mass, held the congregation hostage and triggered a raid by Iraqi security forces. The bloodbath left at least 58 people killed and 78 wounded - nearly everyone inside.

The attack, claimed by an al Qaeda-linked organization, was the deadliest ever recorded against Iraq's Christians, whose numbers have plummeted since the 2003 U.S.-led invasion as the community has fled to other countries.

Outside Our Lady of Deliverance church, Raed Hadi leaned against the car carrying his cousin's coffin, waiting for the police to let him bury him on church grounds.

"It was a massacre in there and now they are cleaning it up," he said Monday morning. "We Christians don't have enough protection. ... What shall I do now? Leave and ask for asylum?"

"Now they make a show," said Jamal Jaju, who watched as Iraqi forces set up a chain link fence around the church and pushed back observers. "What can I say? I lost at least 20 friends in there."

Pope Benedict XVI denounced the assault as "ferocious" and called for renewed international efforts to broker peace in the region.

Prime Minister Nouri al-Maliki also condemned the siege, saying it was an attempt to drive more Christians out of the country.

Islamic militants have systematically attacked Christians in Iraq since the collapse of Saddam Hussein's regime. Catholics made up 2.89 percent of Iraq's population in 1980; by 2008 they were merely 0.89 percent.

Sunday's bloodbath began at dusk, when a car bomb went off in the area and then militants wearing suicide vests and armed with grenades attacked the Iraqi stock exchange.

The car bombing and the attack on the stock exchange, in which only two guards were injured, may have been an attempt by the militants to divert attention from their real target - the nearby church in an upscale Baghdad neighborhood.

That attack soon followed. The gunmen went inside the church and took about 120 Christians hostage.

At least 58 people were killed, including 12 policemen as well as five bystanders thought to have been killed by the car bombing and blasts outside the church before the attackers stormed inside. Forty-one Christians inside the church also died, including two priests.

It was unclear whether most hostages died before or during the rescue.

An Iraqi official who was on the scene as the hostage drama unfolded said he talked on a cell phone with one of the hostages during the siege. He said the hostage described how insurgents began shooting wildly when they went into the church and said he could see about 40 wounded people lying around him on the floor.

When Iraqi special forces joined police and other officials already on the scene, they heard gunshots and decided to enter the church "to prevent the further loss of innocent lives," said Lt. Col. Terry L. Conder, a spokesman for U.S. special forces.

When the Iraqis stormed the building, the militants were shooting at the hostages, the Iraqi official said.

According to two security officials, most of the deaths took place in the basement where a gunman killed about 30 hostages when Iraqi forces began to storm the building. One official said the gunman set off an explosives vest he was wearing, but the other said the gunman threw two grenades at his hostages.

The security officials and the other Iraqi official spoke on condition of anonymity because they were not authorized to talk to journalists.

Video footage from an American drone showed a black plume of smoke pouring out of the church followed by flashes before security forces charged inside. U.S. forces often supply air support to Iraqi forces conducting operations on the ground, feeding them video footage from their aircraft.

Others, however, questioned whether the raid was wise.

Younadem Kana, a Christian member of the Iraqi parliament, condemned the operation as "hasty" and "not professional."

About 4¼ hours passed between the car bombing and the end of the siege shortly after 10 p.m., said an American military official, who spoke on condition of anonymity because he was not authorized to discuss the matter.

A cryptically worded statement posted late Sunday on a militant website allegedly by the Islamic State of Iraq appeared to claim responsibility for the attack.

The group, which is linked to al Qaeda in Iraq, said it would "exterminate Iraqi Christians" if Muslim women in Egypt were not freed.

It specifically mentioned two women that extremists maintain have converted to Islam and are being held against their will in Egypt.

The two are wives of priests. Some believe they converted to Islam to leave their husbands since divorce is banned by Egypt's Coptic Church. One woman disappeared in 2004 and the other this past July.

Egypt's Christians had originally maintained they were kidnapped and staged rallies for their release. In both cases, police subsequently recovered the two women, who denied they had converted. They were then spirited away to distant monasteries.

Iraqi authorities on Monday took extra measures to protect Christian neighborhoods and churches in Mosul, Kirkuk and Baghdad. Additional police cars and checkpoints were seen near many churches, and authorities were conducting extensive searches on cars and pedestrians heading to churches.

"This is more than a tragedy," said Iraq's Human Rights minister, Wijdan Mikheil, who is a Christian.

Choking back tears as she spoke with reporters outside Our Lady of Deliverance church, she said: "What is happening to Iraqis in general and Christians in particular is an attempt to push them out of the country, but we hope Iraqis remain united."

Our Lady of Deliverance is a Syrian Catholic church.

Karim Khalil, a 49-year-old Iraqi Christian, said he moved to Syria with his family last year because he felt his religion made him a target in Baghdad.

"Iraqi militias threatened me, saying I was on the side of the Americans because I am Christian," Karim told the AP. "They said I would be killed if I stayed in Iraq."

Now he lives in Damascus with his wife and five children.

"I have left behind my house and everything to escape with my family," he said.

Many other Iraqi Christians living in Syria refused to speak to the AP. They said they fear militias may exact revenge on their families in Iraq.
By Associated Press Writer Barbara Surk and Hamid Ahmed; AP's Albert Aji, Sinan Salaheddin and Sameer N. Yacoub contributed to this report