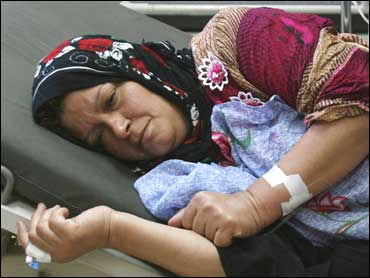 A woman from Baghdad who was the only confirmed case of cholera in the Iraqi capital has died, bringing the number of deaths from the disease in the country to 11, the World Health Organization said Monday.

Dr. Naeema al-Gasseer, the WHO's representative in Iraq, said the woman died Sunday. She was found to have cholera after she turned up last week at the hospital with a severe case of diarrhea.

An official in the capital's Sadr City general hospital, where the woman died, identified her as 40-year-old Majida Hamid Ibrahim, who came from the Jisr Diyala area on Baghdad's southern outskirts.

The woman died of kidney failure caused by cholera, the official said, speaking on condition of anonymity because of security concerns.

Iraq has a total of 1,652 confirmed cases of cholera, with more than 29,000 registered cases of acute watery diarrhea. Of the 10 people who died earlier, nine were in the northern province of Sulaimaniyah and one was in Tamim.

Cases also have been confirmed in the southern city of Basra and the province of Salahuddin, according to the WHO's Web site.

Cholera is an extremely virulent gastrointestinal disease that is typically spread by drinking contaminated water and can cause severe diarrhea that in extreme cases can lead to fatal dehydration and kidney failure. It affects both children and adults.

It can kill healthy adults, although about 75 percent of those infected with cholera do not develop any symptoms but can pass on the disease. People with lower immunity (such as malnourished children or people living with HIV) are at greater risk of death.

Cholera is endemic in Iraq, with about 30 cases registered each year. The last major outbreak was in 1999, when 20 cases were discovered in one day.

The latest outbreak started in mid-August but has been mostly limited to northern Iraq.

However, WHO has warned that with weather cooling and becoming more favorable for transmission of the disease, the bacteria could spread.

On Sunday, Iraqi authorities said a shipment of chlorine had crossed the border from Jordan after concerns were raised about shortages of the chemical needed for water purification to prevent cholera from spreading.

The shipment said earlier that as much as 100,000 tons of chlorine was being held up at the border for fear it would be hijacked and used in explosives. Several chlorine truck bombs blamed on suspected Sunni insurgents earlier this year killed scores of people.