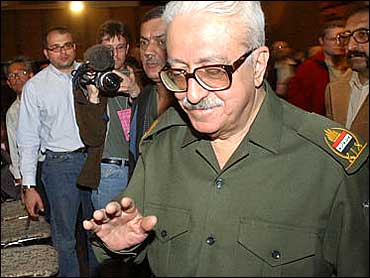 Senior Iraqi prisoners are all insisting during interrogation that Iraq had no chemical, biological or nuclear weapons' programs, U.S. officials said.

The officials said they believe many of the prisoners are lying to protect themselves. The Bush administration has stood by its belief that Iraq possessed prohibited weapons and the means to make more, although none have turned up since the war started on March 19.

The denials also mean U.S. officials aren't getting any information on places to look for the weapons it alleges are in Iraq. Addressing the lack of weapons finds so far, President Bush has said that cooperation by Iraqis would be important.

By denying Iraq had weapons, the prisoners may be trying to distance themselves from Saddam's rule, one official said.

"They are all sticking to that story," the U.S. official said, speaking on the condition of anonymity. "They've got every reason to lie, at least initially."

Former Deputy Prime Minister Tariq Aziz is among the Iraqis in custody saying his government had no prohibited weapons, officials said. So is Lt. Gen. Amer al-Saadi, Saddam's alleged point man on chemical and biological agents.

The Bush administration has cited intelligence pointing to prohibited Iraqi weapons programs as the main justification for war.

Officials now say the weapons are either well hidden or were destroyed in the run-up to the war. There is no firm evidence they were moved to other countries, they say.

Saddam's government denied having any weapons of mass destruction until the end, saying it had destroyed them years before.

Fears that Saddam's military would use chemical weapons on the battlefield went unrealized, and U.S. officials have not reported any evidence that his military units were equipped with those weapons, as some prewar intelligence had indicated.

Secretary of State Colin Powell, under questioning before the Senate Foreign Relations Committee on Tuesday, predicted prisoners would yet help U.S. forces find the alleged weapons.

"They will be found," he said.

One unidentified scientist cooperating with American interrogators has contended the government destroyed its weapons in the run-up to the war. But his information has not been verified, officials said.

Separately, a group of scientists who claim to have been involved in purely civilian biological research, say they were ordered to destroy their work in the lead-up to war.

Around Iraq, American forces are finding suspicious chemicals and other possible signs of weapons programs, but nothing conclusive, officials said. So far, thorough testing has not verified any of the chemicals are weapons.

Initial tests on a 55-gallon drum found in an open field near the northern Iraqi town of Baiji this weekend indicated it might contain the nerve agent cyclosarin and a blister agent that could be mustard gas. The New York Times reported subsequent tests proved negative.

Other signs include burned documents and other evidence of an attempt to destroy evidence, officials said.

After coming up empty, military officials have largely abandoned earlier methods of searching only suspected weapons sites that were noted before the war. Now, defense officials say they are primarily going where Iraqis point them.

The weapons hunt is important not only to justifying the war, but also to getting the Security Council to lift sanctions as requested by the United States.

Sanctions are constructed to end once Iraq is found free of weapons of mass destruction.

The U.S. has resisted any extensive U.N. role in the weapons hunt. Some 1,000 experts are on U.S. teams that will search for weapons.

Meeting with Blair on Tuesday, Russian President Vladimir Putin insisted that sanctions stay in place until the weapons issue is resolved. "After the end of the war, the central role of the United Nations must be not only restored but strengthened,'' he said

Blair said on Monday there was a need for a process of "independent verification" of Iraq's weapons program but didn't say whether he believed that task should fall to the United Nations.