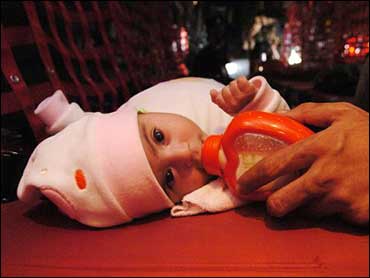 An Iraqi infant with severe birth defects arrived in Atlanta Saturday for medical treatment that was offered after U.S. soldiers discovered her during a raid on a home.

Baby Noor al-Zahra, or "Baby Nora" to the Americans, was responsive Saturday evening and in good condition, said Kevin McClelland, spokesman for Children's Healthcare of Atlanta. He said it likely will be another week before she goes into surgery.

The three-month-old child left Baghdad in a military transport plane Friday, accompanied by her grandmother and father. An airport worker in Atlanta translated the grandmother's brief comments after they arrived at Hartsfield-Jackson Atlanta International Airport.

"She said they're happy to be here," the worker said

U.S. troops discovered the baby three weeks ago during a raid of a house in Abu Ghraib, a poverty-stricken district west of Baghdad. The soldiers noticed paralysis in the baby's legs and what appeared to be a tumor on her back.

They later learned the 3-month-old child had spina bifida, a birth defect in which the backbone and spinal cord do not close before birth. The "tumor" on the baby's back was actually a fluid-filled sac containing part of the spinal cord and membranes that are supposed to cover the spinal cord.

U.S. doctors were sent e-mail photos of the baby and received some medical information, but they still needed to do a full evaluation before attempting surgery, said Dr. Roger Hudgins, a pediatric neurosurgeon who agreed to take the case.

"I think the chances of her survival are good," Hudgins said Saturday. Without more medical care, "she would have died."

Baby Noor's health care is to be provided for free, he said. The surgery and accompanying care would cost about $200,000 if it were billed.

the medical attention will give her a new start on life (video).

"It's really gratifying to know that my action and the actions of my platoon and my unit could help this little girl," Donnelly told CBS News.

Hudgins also praised the soldiers for their role in getting Baby Noor to the United States. Sen. Saxby Chambliss, R-Ga., helped arrange the trip. "This is certainly an exciting day for everyone," said his spokesman Greg Wright.

Baby Noor will probably need one or two months in the United States to complete the medical repairs and recovery before returning to Iraq. Her grandmother and father are to stay with a host family arranged by Childspring International, a faith-based children's medical charity.