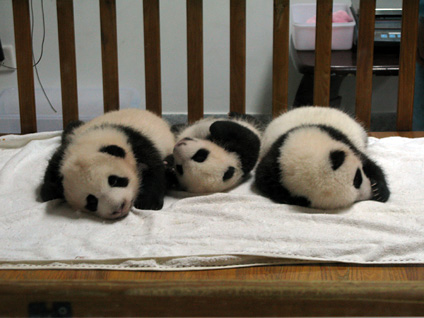 Wrapping up his investigation into Saddam Hussein's purported arsenal, the CIA's top weapons hunter in Iraq said his search for weapons of mass destruction "has been exhausted" without finding any.

Nor did Charles Duelfer, head of the Iraq Survey Group, find any evidence that such weapons were shipped officially from Iraq to Syria to be hidden before the U.S. invasion, but he couldn't rule out some unofficial transfer of limited WMD-related materials.

He closed his effort with words of caution about potential future threats and careful assessment of this and other unanswered questions.

While concluding yet again that Iraq had no weapons of mass destruction, this latest report from the Iraq survey group also warns that Saddam Hussein's experts could find work elsewhere, for terrorists or unfriendly governments, reports CBS News Correspondent Steve Holt.

The Bush administration justified its 2003 invasion of Iraq as necessary to eliminate Hussein's purported stockpile of WMD.

In 92 pages posted online Monday evening, Duelfer provided a final look at an investigation that, at its peak, occupied more than 1,000 military and civilian translators, weapons specialists and other experts. His latest addenda conclude a roughly 1,500-page report released last fall.

Among warnings sprinkled throughout the new documents, one concludes that Saddam's programs created a pool of weapons experts, many of whom will be seeking work. While most will probably turn to the "benign civil sector," the danger remains that "hostile foreign governments, terrorists or insurgents may seek Iraqi expertise."

"Because a single individual can advance certain WMD activities, it remains an important concern," one addendum said.

WMD consultant Andy Oppenheimer says one of those unfriendly governments could one day turn out to be Iraq, Holt reports. He says it's not enough to look at what's happening in Iraq now, but at what could happen.

Another addendum noted that military forces in Iraq may continue to find small numbers of degraded chemical weapons — most likely misplaced or improperly destroyed before 1991. In an insurgent's hands, "the use of a single even ineffectual chemical weapon would likely cause more terror than deadlier conventional explosives," the addendum said.

And still another said the survey group found some potential nuclear-related equipment was "missing from heavily damaged and looted sites." Yet, because of deteriorating security in Iraq, the survey group was unable to determine what happened to the equipment, which also had alternate civilian uses.

"Some of it probably has been sold for its scrap value. Other pieces might have been disassembled" and converted into motors or condensers, an addendum said. "Still others could have been taken intact to preserve their function."

Leaving the door to the investigation open just a crack, a U.S. official, who spoke on condition of anonymity, said a small team still operates under the U.S.-led multinational force in Iraq, although the survey group officially disbanded earlier this month. Those staying on continue to examine documents and follow up any reports of weapons of mass destruction.

In a statement accompanying the final installment, Duelfer said any surprise discovery would be most likely in the biological weapons area because facilities and other clues would be comparatively small.

Among unanswered questions, Duelfer said a group formed to investigate whether WMD-related material was shipped out of Iraq before the invasion wasn't able to reach firm conclusions because the security situation halted its work. Investigators were focusing on transfers from Iraq to Syria.

The questioning of Iraqis did not produce any information to support the transfer possibility, one addendum said. The Iraq Survey Group believes "it was unlikely that an official transfer of WMD material from Iraq to Syria took place. However, ISG was unable to rule out unofficial movement of limited WMD-related materials."