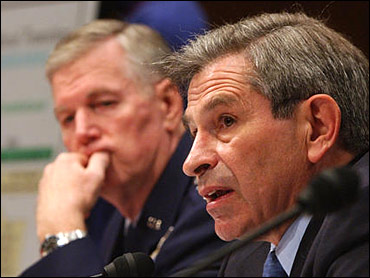 A top Pentagon official told lawmakers Wednesday the Iraqi military operation "is going to cost us more money" than anticipated, and the White House left open the possibility it will seek the additional funds before the end of the year.

A rough first estimate showed that the decision to keep 20,000 troops in Iraq for some 90 days longer to deal with increased violence will cost about $700 million, Gen. Richard Myers, chairman of the Joint Chiefs of Staff, told the House Armed Services Committee.

Defense officials are studying their budget now to determine how much and whether some monies can be moved from other Pentagon accounts, Myers said. "We're in the middle of that analysis right now," he said.

White House spokesman Scott McClellan said the White House had received assurances from Pentagon officials "that the funding they have now is more than adequate to meet their needs."

But he said the issue was constantly being evaluated. "The decisions should be based on what the commanders in the field feel is necessary," he said.

McClellan spoke as Myers told lawmakers that the extended deployments of forces in Iraq and the increased tempo of operations "is going to cost us more money."

President Bush, meanwhile, met Wednesday morning with Defense Secretary Donald H. Rumsfeld. There was no immediate indication what they discussed.

On Capitol Hill, two leading lawmakers urged the Bush administration to present Congress with a projected price tag of Iraq operations next year, a politically delicate step the White House has said it does not intend to take in an election year.

"They haven't asked for one single penny for next year for Afghanistan and Iraq," said Sen. Joe Biden of Delaware, the ranking Democrat on the Foreign Relations Committee. "Give me a break. Give me a break!"

"The administration would be well served here to come forward now, be honest about this, because the continuity and the confidence in this policy is going to be required to sustain it," Hagel said. "And that means be honest with the Congress, be honest with the American people.

Both senators spoke on NBC television.

Through December, the military had spent $56 billion in Iraq, and was spending at a rate of about $4 billion a month. That's separate from what the Coalition Provisional Authority is spending. Prior to the invasion last year, the White House refused to estimate what the war would cost.

Some lawmakers fear that spiraling violence in Iraq mean that more money will be needed soon.

Biden and Hagel also raised the possibility that compulsory military service might be necessary to relieve pressure on U.S. troops stretched around the globe.

The nation is engaged "in a generational war here against terrorism," Hagel said. "It's going to require resources."

"Should we continue to burden the middle class who represents most all of our soldiers, and the lower-middle class?" Hagel said. "Should we burden them with the fighting and the dying if in fact this is a generational — probably 25-year — war?"

"I am not proposing a draft, but I think some kind of mandatory service for this country for all our citizens, for the privileged, the rich, all those who have a lot, should be something we take seriously here," Hagel said.

McClellan said a draft was not currently under consideration.

The spokesman also deflected questions about whether Mr. Bush's coalition in Iraq is unraveling. The Dominican Republic on Tuesday joined Spain and Honduras in announcing it was withdrawing its troops from Iraq.

"The coalition remains strong. Their resolve is strong," he said.

He noted that there have been strong statements issued by Britain, Japan, Italy and Portugal.

Later Wednesday, Deputy Defense Secretary Paul Wolfowitz appeared before another panel of lawmakers, a day after he irritated some senators with a half-hour speech on how brutal Saddam Hussein was, and how much better off Iraq was without him.

On Wednesday before the House Armed Services Committee, Wolfowitz focused more on answering questions that have been raised, though he gave few new details.

"Some say we have no plan. We have a plan," he said referring to U.N. suggestions for forming an interim government to take over from occupation authorities. Senators want to know more — exactly who those people will be, how they will be picked, what happens if fractious Iraqis cannot agree on their selection before the handover.