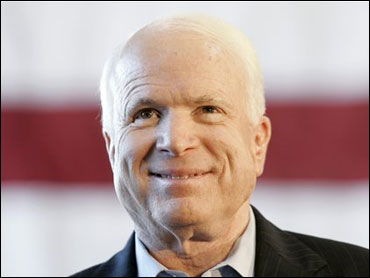 
John McCain is fighting a tide of low expectations. As he treks from Iowa to New Hampshire, speaking at town hall meetings and V.F.W. posts, he is dogged by concerns that he stands for a lost war in Iraq and a lost campaign for president.

Yet he is undeterred. "I wouldn't be in it if I couldn't win," Sen. McCain said in an hour-long interview with Politico. "There is plenty of time."

So the Arizona Republican sprints from the early primary states to an appearance on NBC's "Meet the Press" today and on to South Carolina. His upcoming campaign swing south is a strong measure of McCain's conviction that he will emerge as a viable candidate from the pivotal earlier contests in Iowa and New Hampshire.

He is keenly aware of public doubts about both his presidential bid and the war in Iraq, but the war hero who staked his campaign on one last escalation in Iraq pledges to carry on.

The trudge is wearing. His campaign is haunted by the war in Iraq, and he remains uneasy over Gen. David Petraeus' recommendation to withdraw 30,000 U.S. troops from Iraq by next summer. "I have to rely on [Petraeus'] judgment. I have so far and I do now. Does it make me a little nervous?" McCain hesitated. "Yeah."

That President Bush also backs Petraeus, and that McCain and Bush are now in line on Iraq, is a turn of fate that nearly mocks McCain's constant criticisms of the administration's war plan.

It has been that kind of year. McCain has struggled to reconcile his party loyalty with his president, his conscience with his campaign, and above all, his nonconformist nature with his awareness that even fighter pilots need wingmen.

The memory of the other war, where he was shot down, seems to rattle McCain's confidence today. Beneath his certitude is a man who fears being viewed a warmonger - but who also fears some future judgment that he did not help prevent America from losing yet another war.

McCain does not take to comparing Vietnam to Iraq; neither can he escape wondering if all those past lessons seem lost today.

"We used the 'search and destroy' tactics," he said of Vietnam, noting the tactics "failed" there as well. He believes the intransigence of leadership in both wars was a key reason behind the undoing of the American war effort.

His captivity during the Vietnam War lingers behind each word he says of today's administration, the leaders of which did not fight in that other muddled war.

"I try not to get personal. It was just so frustrating to watch this." McCain said. "It was like watching a train wreck, the looting, the de-Baathification, the insufficient number of troops.

"And of course, doubly frustrating were these statements of 'last throes,'" McCain added, referring to Vice President Dick Cheney's exaggerated description of the strength of the insurgency two years ago. "Or a "few dead-enders" - how then-Defense Secretary Donald Rumsfeld described the state of the enemy four years ago.

"That just was an insult to one's intelligence," McCain said - an insult to anyone "who could observe the steady deterioration of the situation."

The surge was meant to reverse that deterioration, and McCain supports Petraeus' plan to postpone further discussion of drawing down troops until forces return to pre-surge levels. That may not be enough for most Democrats, some Republicans, and possibly the majority of Americans.

But McCain declines to go further. He appears most comfortable when defying someone. Still, all his recent fights seem only to have hobbled his campaign.

He has angered independents by supporting an unpopular war. He spurned the political right by supporting immigration reform. And detractors contend he damaged the indepenent reputation he spent decades building.

Few examples have stood out to opponents more than his muffled row with the religious right. During his 2000 campaign for president, McCain was deeply critical of some leading Christian conservatives. This time around, he spoke at Jerry Falwell's Liberty University in Lynchburg, Va. It seemed a calculated reversal to some, but McCain fights this charge, too.

"Jerry Falwell came in this office … [and] said, 'Senator McCain, I want to put our differences behind us.' But 'McCain panders to the right,'" became the storyline, McCain said. "Why wasn't McCain pandering to the left when I went to New School?" he asked, referring to a New York City college as liberal as Falwell's is conservative.

Meanwhile, as the once-friendly media began to question whether McCain was playing to party conservatives, he faced yet another antagonist.

The summer has been full of such obstacles. It's been only two months since McCain's coffers were nearly empty, his closest advisors left his campaign, and his support in the polls began a gradual but unceasing decline.

He has already grown tired of talking about it. Asked if he could make a comeback, he answered, "We already have." Asked how he gets back on the list of top-tier Republican candidates, McCain replied curtly, "We already are."

To improve those numbers, McCain must solidify his conservative base and improve campaign fundraising. He doesn't mind the former - "The town hall meetings I enjoy more than anything" - but the latter remains a challenge.

"I think fundraising is the hardest part," he said. "But I keep trying … to be better. I know it's an essential part of campaigns."

And yet it is the essentials that have tripped him up the most. It's more than money. At 71, McCain often appears less vigorous than his competitors on the trail, even though he appears trim and fit in person outside the spotlight.

Yet McCain has yet to convince the public. It was just over a decade ago, in 1995, that another veteran Republican senator, Bob Dole of Kansas, ran for the presidency but was undercut by questions about his age and energy.

"As much as I loved Bob Dole, and I do love him," McCain says "I never got the sense …  that Bob was invigorated by the campaign. It's not that he didn't like it. It was not something he got excited about. You've got to communicate not only your vision, and your ideas, but your enthusiasm."

McCain indicated that the campaign ahead will be more combative. Gone is the cautious front-runner, even when he talks about his own party.

"You can't justify some of things that Republicans have done, particularly in the area of spending, which has led to corruption," he said. "The handling of Katrina, the failures of the war in Iraq, it's a tough struggle. I'd much rather be running as the nominee of the party with a high approval rating."

Yet the war and national security issues both define and bedevil McCain. He relishes going after leading Democrats for their votes against war funding - even as they rebuke him for supporting an unpopular president. He accepts tht the fight is inseparable from his campaign.

"I'm sure that [the war] has a great effect on it. … The irony, of course, is that people think I am Bush's guy on Iraq ," he laughed, with a note of frustration. "But life isn't fair, [John F.] Kennedy said."