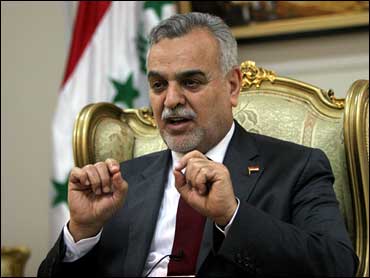 Tariq al-Hashemi has sent part of the law back to parliament to be amended so that more seats will be allocated for Iraqis living abroad, most of whom are Sunni Arabs. A member of Iraq's electoral commission said al-Hashemi's move will likely push back the election date, tentatively scheduled for mid-January.

Al-Hashemi said all other provisions in the law are satisfactory, and stressed that only the article related to the number of seats for voters abroad will be open for discussion.

"My objection is not to the entire law, but only the first article in order to be fair to Iraqis living abroad," al-Hashemi told reporters. "I hope that parliament will hold a vote soon on the suggested amendments so that elections can be carried out at their schedule date."

As one of three members of Iraq's presidential council, al-Hashemi holds veto power over legislation.

It was not immediately clear when parliament would take up the vice president's suggestions, or what impact it would have on the date of elections. No final date has been set yet for the vote, but the constitution mandates that it be held before the end of January.

But Qassim al-Aboudi, a member of the electoral commission, told reporters the commission had suspended all of its activities tied to the vote's preparations.

"The situation is very difficult, and it it clear now that this will affect the commission's procedures and for sure will push the elections back," al-Aboudi said.

A member of the parliamentary legal committee, Kurdish lawmaker Khalid Shwani, said the committee will study al-Hashemi's suggested changes as soon as they receive them.

"If we received it today, then we will study the suggestions starting tomorrow and then we will put the article to a vote," Shwani told The Associated Press.

"I can't put a specific timetable on the vote because it will depend on how long the discussions take."

Dominant for decades under Saddam, Iraq's minority Sunni Arabs have felt politically marginalized since the former dictator's ouster in 2003. They boycotted the first post-Saddam national elections in January 2005, and al-Hashemi's demands appear to stem from Sunni fears of being sidelined once again.

Lawmakers haggled for weeks over the election legislation before finally passing it on Nov. 8, much to the relief of Iraqi political leaders and the United States, which pushed hard for a deal.

Little more than a week later, the hard-fought agreement appears to be crumbling. Iraq's Kurds have also demanded changes to the law to ensure more seats for Kurdish regions in parliament, and on Tuesday threatened to boycott the elections unless their demands were met.

That ultimatum, coupled with al-Hashemi's move on Wednesday, could undermine Iraq's fledgling democracy and delay Washington's plans to withdraw all combat troops by the end of August. U.S. commanders have tied the move to the national vote.

U.S. military officials have said they will begin to draw down forces about 60 days after the election, hoping for assurances by then that Iraq is on stable footing.

Under a plan by President Obama, all U.S. combat personnel must be out of Iraq by the end of August 2010. The rest of the troops, such as trainers and support personnel, must leave by the end of 2011.