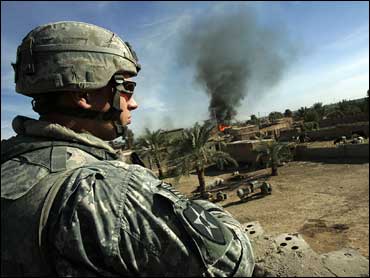 The number of Iraqis killed last month fell to 718, an Associated Press tally showed, the lowest monthly death toll since just before the 2006 bombing of a Shiite shrine provoked a vicious cycle of retaliatory sectarian violence.

The figures come as the military says violence has fallen to levels not seen in nearly two years, while acknowledging that Iraqis are still dying in unacceptable numbers.

An expert on the effect of conflicts on civilians agreed, saying that while the downward trend was positive, it needed to be kept in perspective.

"We've gone from horrific levels of murder to very bad, which is an improvement but not a reason to celebrate," said Richard Garfield, a professor at New York's Columbia University and a manager of health and nutrition for the World Health Organization. "At these so-called low levels, there's a massive number of excess deaths still likely to occur."

It was the third consecutive monthly decline in the death toll of Iraqi civilians and security forces since August, when a massive suicide bombing targeting minority Yazidis in northern Iraq helped push the figure to at least 1,956.

Some 500 are thought to have perished in the bombing of the Yazidis.

At least 1,023 Iraqis were killed in September, 911 in October and 718 in November, the lowest since January 2006, when 615 Iraqis were killed, according to figures compiled by the AP from hospital, police and military officials, as well as accounts from reporters and photographers. Insurgent deaths were not included. Other counts differ and some have given higher civilian death tolls.

The number of U.S. troop deaths also declined for the sixth consecutive month, with at least 37 recorded in November, according to an AP tally based on military figures. That was the lowest number since March 2006, when 31 American service members died.

Despite the overall drop in deadly violence last month, at least seven Iraqis were killed in three attacks in and around Baghdad today.

A roadside bomb in a Sunni-dominated neighborhood claimed the lives of two police officers. Another officer was shot to death on his way to work.

Three soldiers were killed by a roadside bomb north of the city. And a third bomb blew up beneath a parked car near a Shiite mosque, taking the life of a civilian.

The U.S. military has said the decline in the number of deadly attacks is largely due to a troop buildup this summer of some 30,000 additional troops that enabled them to get closer to the population, as well as a sharp turn of public opinion against al Qaeda in Iraq and other extremist groups.

But American commanders and other officials have gone to great lengths to warn that militants on both sides of the Sunni-Shiite divide still pose a major threat, and violence continues.

"We're always encouraged by any downward trend in violence, but we can't get complacent," said Navy Lt. Patrick Evans, a military spokesman.

"There have been improvements in security, however, militants, insurgents, extremists and criminals out there will continue to keep looking for opportunities, so we have to remain vigilant and on alert," he added. "There's still a lot of work that needs to be done."

The numbers were high even before the Feb. 22, 2006 bombing in the city of Samarra north of Baghdad, which devastated the golden dome of a revered Shiite shrine. But the attack caused longstanding tensions to boil over and assassinations, bombings and execution-style killings were rampant.

November of that year was one of the deadliest of the war, with at least 2,250 Iraqis killed, dwarfing recent figures.

Garfield, the Columbia University expert, expressed concern that the recent reports of the decline in violence could tempt people to ignore the fact that the numbers are still high amid rising public criticism of the war.

"I think there is a great potential to close the door on Iraq, bring the troops home, wash our hands of it," he said in a telephone interview from Geneva. "But the improving trend suggests that the right kind of presence of the international force can make a tremendous difference in how the Iraqis are doing and they will need that presence for a long time."

He also estimated the count was only one-third of the actual total, underlining the difficulties in keeping track of the number of Iraqi civilians who have been killed since the U.S.-led invasion in March 2003, with wide-ranging estimates that cannot be confirmed due to the tenuous security situation.

Iraq Body Count, an independent organization that tracks media reports as well as official figures, estimates that 77,573 to 84,502 civilians have been killed.

In a bid to better detect trends in the violence, the U.S. military is planning to increasingly use Iraqi data while warning that both sets of information are flawed.

"We recognize that when we only use coalition reports we underreport," said Col. Bill Rapp, a senior aide to the top U.S. commander in Iraq, Gen. David Petraeus.

Rapp, speaking to a small group of reporters at a recent briefing on measuring trends, said the increasing use of Iraqi data became a priority as Petraeus shifted the U.S. command's focus to protecting the Iraqi people. It also will help the military fill in the gaps as it draws down forces and transfers more security responsibilities to the Iraqi government in coming months.

U.S. officials acknowledged that Iraqi government data is often incomplete and imprecise as well as tainted by potential sectarian bias. For example, there was a 50 percent decrease in field reports to the Iraqi national command center in October after the government failed to pay a contractor responsible for satellite transmission of the data.

But the military is working with the Iraqis to develop an automated database of their own that would help eliminate duplicate reports, among other attributes.

"We want to avoid the perception that if the coalition forces did not see it, it did not happen," said Lt. Col. Todd Gesling, an Army officer who works with databases.