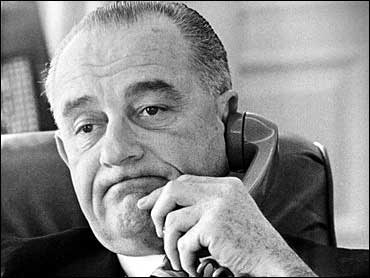 A now-disputed account of a North Vietnamese attack on U.S. destroyers in the Gulf of Tonkin led President Lyndon B. Johnson to escalate America's involvement in Vietnam, a chain of events drawing comparisons on its 40th anniversary to the U.S.-led invasion of Iraq.

Johnson told Americans that communist torpedo boats fired on U.S. destroyers on Aug. 2 and Aug. 4, 1964. Following that, Congress voted almost unanimously on Aug. 7 to give Johnson approval to step up U.S. involvement in Vietnam.

Some argue Johnson and Congress acted hastily based on limited or misleading information, launching America into a divisive war where some 58,000 Americans and an estimated 3 million Vietnamese troops and civilians died.

"The (Gulf of Tonkin) resolution was a blank check," said Tony Edmonds, a professor at Ball State University in Muncie, Ind., and expert on Vietnam. "Certainly very similar to what happened with the congressional resolution on the Iraq war."

A year after the Sept. 11, 2001, attacks on the United States, President Bush also received overwhelming support from Congress, in an October 2002 vote, to invade Iraq following now-discredited intelligence reports that Saddam Hussein had weapons of mass destruction.

The Aug. 2 attack, prompted by U.S.-directed commando attacks on the North, is not disputed. But the Vietnamese - along with several American scholars - contend a second attack never occurred.

"More recent analysis ... now makes it clear that North Vietnamese naval forces did not attack (USS) Maddox and (USS) Turner Joy that night in the summer of 1964," Edward J. Marolda, a senior historian at the U.S. Naval Historical Center, wrote in a report reversing a 1986 account he co-authored about the Aug. 4 incident.

Moise does not believe Johnson initially lied to the American public, but rather that the president received bad information and became ensnared. But Moise said the belief that a second attack occurred did prompt a swift congressional response that may have otherwise been harder for Johnson to obtain.

"I think he soon learned there probably had not been an attack on Aug. 4," Moise said. "From that point onward he became dishonest, pretending the evidence still supported the reality of the Aug. 4 attack, to avoid political embarrassment."

In Vietnam, the 40th anniversary was profiled in recent days on state television and in newspaper articles with photos of veterans now in their 70s, soldiers who proudly recalled fighting the Americans.

Vietnam and the United States have made amends since the war ended in 1975, and America is now Vietnam's largest trading partner. Last week, an American warship docked in central Danang, the first visit there by a U.S. ship since the war. Marines who landed at Danang four decades ago became the first U.S. ground troops to enter the war.