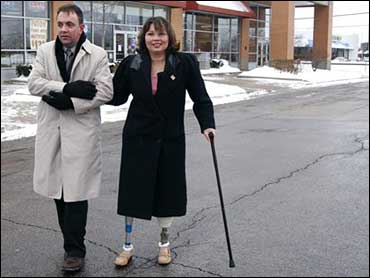 The Army major is one of about a half dozen Iraq war veterans running for office as Democrats, lending their military backgrounds to the party's argument that it can be strong on defense and national security, even as its leaders criticize President Bush's handling of the war.

the suburban Chicago seat Duckworth is running for is key for Democrats (video).
A long-time Republican stronghold, it is next to Speaker of the House Dennis Hastert's district.

Duckworth says she wants to focus on health care, education and the economy in her campaign, though she knows the war will be a big issue.

She privately disagreed with Bush's decision to invade Iraq, but still volunteered to serve.

Duckworth and her Democratic opponents in the March primary face an uphill battle in the 6th District, in Chicago's western suburbs. The conservative Hyde represented the area for 32 years.

Her Democratic opponents — businesswoman Christine Cegelis and Wheaton College professor Lindy Scott — have had a head start on fundraising, because Duckworth had to delay her candidacy until her release from active duty, granted Wednesday. State Sen. Peter Roskam is the only Republican candidate for Hyde's seat.

Duckworth, who has degrees in political science and international affairs, says she decided to run after attending the State of the Union address as a guest of Sen. Richard Durbin, D-Ill., and testifying before veteran affairs committees on Capitol Hill.