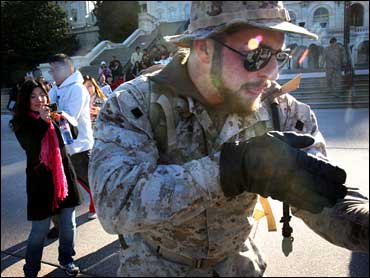 A U.S. veteran who served in the Iraq war could lose his honorable discharge status after being photographed wearing fatigues at an anti-war protest.

Marine Cpl. Adam Kokesh and other veterans marked the fourth anniversary of the war in Iraq in March by wearing their uniforms — with military insignia removed — and roaming around the nation's capital on a mock patrol.

After Kokesh was identified in a photo caption in The Washington Post, a superior officer sent him a letter saying he might have violated a rule prohibiting troops from wearing uniforms without authorization.

Kokesh, a member of Iraq Veterans Against the War, responded with an obscenity.

A military panel has been scheduled to meet with Kokesh on Monday to decide whether his discharge status should be changed from "honorable" to "other than honorable."

"This is clearly a case of selective prosecution and intimidation of veterans who speak out against the war," Kokesh said. "To suggest that while as a veteran you don't have freedom of speech is absurd."

Kokesh is part of the Individual Ready Reserve, a segment of the reserves that consists mainly of those who have left active duty but still have time remaining on their eight-year military obligations.

His attorney, Mike Lebowitz, said Kokesh's IRR status ends June 18. He said at least three other veterans have been investigated because of their involvement at demonstrations.

Kokesh, 25, enlisted in the Marines while still attending high school in New Mexico. He was a reservist in an artillery unit, assigned to the November Battery, 5th Battalion, 14th Regiment of the 4th Division based out of Pico Rivera, Calif., near Los Angeles.

Kokesh said he had reservations about Iraq even before the United States invaded, but wanted to go there to help rebuild schools and mosques after Saddam Hussein's regime was toppled. He even learned Arabic.

He said he grew disillusioned with the war during his first tour and now believes there is no way for the country to achieve the rule of law with a foreign military imposing martial law.

He was supposed to go to Iraq a second time, but was demoted from sergeant to corporal and not allowed to return after it was learned that he brought a pistol back after his first tour in 2004.

Kokesh argues that he was not representing the military at the protest in Washington, and he made that clear by removing his name tag and other military insignia from his uniform.

Lebowitz said Kokesh technically is a civilian unless recalled to active duty and had the right to be disrespectful in his response to the officer. He called the proceedings against Kokesh highly unusual and said the military usually seeks to change a veteran's discharge status only if a crime has been committed.

If his discharge status is changed, Kokesh said he could lose some health benefits and be forced to repay about $10,800 he received to obtain his undergraduate degree on veterans benefits.

Kokesh said he holds no ill will toward the Marines.