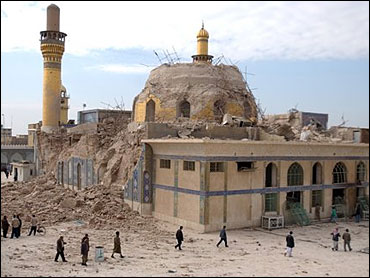 A top Iraqi security official on Wednesday said authorities had arrested a key al Qaeda suspect, a Tunisian, wanted in the bombing of the Shiite Golden Dome shrine last February in Samarra.

A spasm of sectarian killing and revenge attacks on Sunni and Shiite mosques after the bombing of the revered shrine in Samarra, 60 miles north of Baghdad, took the country to the brink of civil war.

Since then more than 20,000 familIes were displaced from their homes, hundreds of civilians were killed and dozens of mosques belonging to both Muslim sects were damaged or destroyed.

National Security Adviser Mouwafak al-Rubaie said the ringleader in the operation, an Iraqi he identified as Haitham Sabah Shaker Mohammed al-Badri, still was on the run.

Al-Rubaie identified the arrested man as Yousri Fakher Mohammed Ali, a Tunisian also known as Abu Qudama. He was seriously wounded in a clash with security forces north of Baghdad few days ago in which 15 other foreign fighters were killed, al-Rubaie said.

Abu Qudama and al-Badri were in a gang that included two other Iraqis and four Saudis who carried out the Feb. 22 attack, the security adviser said.