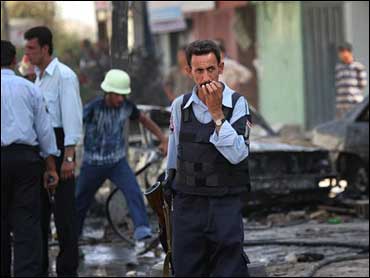 The head of the committee writing Iraq's constitution said Sunday he will recommend that his group ask parliament for an extension of up to 30 days to finish the draft.

Parliament has until Aug, 15 to approve the charter and submit it to a national referendum in mid-October under a formula strongly supported by the Americans. But major differences remain among the ethnic and religious groups represented on the committee.

"I will suggest to the committee drafting the constitution now to postpone the period for a maximum of 30 days," Hammoudi told The Associated Press as he went into a closed-door committee meeting.

Hammoudi's comment came after framers of the new constitution said they expected to submit a draft in time for parliament to meet the deadline for approval, though they added decisions on some key points may be deferred until a later date.

The United States has been pushing the Iraqis to meet the deadline to maintain political momentum seen as crucial to defeating the insurgency and enabling U.S. and other foreign troops to begin leaving Iraq next year.

Main points in dispute include such issues as federalism, dual nationality and the role of Islam.

A Sunni member of the committee, Saleh al-Mutlaq, suggested postponing a decision the most troublesome issues until after the Dec. 15 general elections.

The constitution should be approved by parliament by Aug. 15 and submitted to the voters in a referendum two months later.