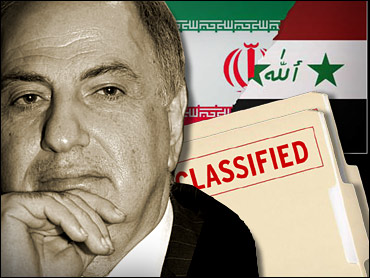 "They should be arrested and then questioned and then we will evaluate the evidence, and then if there is enough evidence, they will be sent to trial," said Judge Zuhair al-Maliky.

The warrants, issued Saturday, accused Ahmad Chalabi of counterfeiting old Iraqi dinars — which had been removed from circulation following the fall of Saddam Hussein's regime last year, he said.

Ahmad Chalabi appeared to have been hiding the counterfeit money amid other old money and changing it into new dinars in the street, he said.

Police found the counterfeit money along with old dinars in Ahmad Chalabi's house during a May raid, he said.

Salem Chalabi, Ahmad Chalabi's nephew and the head of the tribunal trying Saddam, was named as a suspect in the June murder of the Haithem Fadhil, director general of the finance ministry.

Both men were reportedly out of the country Sunday.

Haidar al-Moussawi, Ahmad Chalabi's spokesman, said members of his Iraqi National Congress had heard of the arrest warrants only through the media.

"Such a warrant has been issued, but no one called any of the accused or gave them a chance before issuing the arrest warrant," he said.

"These are very bad indications about the state of justice and law in the new Iraq," he said.

If convicted, Salem Chalabi could face the death penalty, which was restored on Sunday, al-Maliky said. Any sentence for Ahmad Chalabi would be determined by the trial judges, he said.