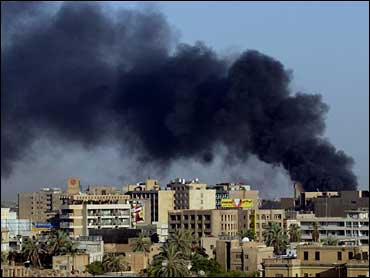 Militants have apparently shot a Turkish hostage kidnapped in Iraq, according to a video posted on the Internet.

It was not clear when the hostage was killed and his name does not match those of the two Turkish truck drivers kidnapped in Iraq last week.

In the video, found on an Islamic Web site Monday, the Turk identifies himself as Murat Yuce from Ankara and says he worked for the Turkish company Bilin Tur.

In Ankara, a manager for Bilin Tur, Hasan Mecit, told The Associated Press the catering firm has an employee named Murat Yuce in Iraq, but it has no knowledge that he had been killed.

The video shows a man identified as a Turk kneeling in front of three armed men. The man reads a statement in Turkish and says he works for a Turkish company that subcontracted for a Jordanian firm.

"I have a word of advice for any Turk who wants to come to Iraq to work: 'You don't have to holding a gun to be aiding the occupationist United States ... Turkish companies should withdraw from Iraq," he says.

At the end of the statement, the leader of the three presumed kidnappers takes out a pistol and shoots the Turk in the side of the head. The Turk slumps to the ground, and the kidnapper shoots him in the head twice more. Blood is seen on the ground next to his head.

A black banner on the wall behind the kidnappers identfies the group as the Tawhid and Jihad, which is led by the Jordanian militant linked to al-Qaida, Abu Musab al-Zarqawi.

The Turkish truckers association said Monday that it will no longer transport goods to U.S. forces in Iraq in an attempt to get kidnappers to release Turkish hostages.