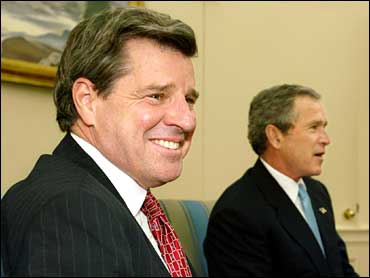 President Bush named L. Paul Bremer, a former ambassador and head of the State Department's counterterrorism office, to be his special envoy to Iraq and oversee its transition to democratic rule.

The appointment resolved a debate between the State Department and the Pentagon over the administration of Iraq, with Secretary of State Colin Powell pushing for greater civilian control and Defense Secretary Donald H. Rumsfeld seeking a strong hand for the military.

The New York Times characterized the appointment as a victory for Powell over Rumsfeld, who had hoped to have the Pentagon retain control of the postwar effort. The Times also reports the appointment will help placate United Nations and European critics, who have complained that Iraq should be governed by a civilian during this interim period to lessen the appearance of a military occupation

Bush announced the appointment Tuesday during a White House meeting with Rumsfeld. He said he was "sending one of our best citizens" and called Bremer "a man with enormous experience — a can-do type of person."

The president said he has "full confidence" in Bremer, who was present when Bush made the announcement in the Oval Office.

In taking the job, Bremer, 61, is leaving a private-sector crisis consulting firm, reports CBS News White House Correspondent Mark Knoller. He was a former assistant to former Secretaries of State William P. Rogers and Henry Kissinger. He also has extensive government experiencem including three years as ambassador-at-large for counterterrorism under Ronald Reagan.

He later worked for a consulting firm headed by Kissinger and currently serves as chairman and chief executive of the Marsh Crisis Consulting company.

In his new assignment, he will be senior to Garner, a retired Army general, representing a military-to-civilian handoff.

A White House statement on the appointment said that Bremer, as the "senior coalition official in Iraq," would report directly to Rumsfeld. Gen. Tommy Franks, commander of all U.S.-led forces in the region, "will maintain command over coalition military personnel in the theater," the statement said.

Bremer will oversee the transition from rule by Saddam Hussein to a yet-to-be-determined interim Iraqi government. The Bush administration has said it expects this government to include a wide diversity of Iraqi groups.

Bush said Bremer "shares the same values as most Americans share, and that is our deep desire to have an orderly country in Iraq that is free and at peace, where the average citizen has a chance to achieve his or her dreams."

In a question-and-answer session with reporters, Bush reiterated his conviction that the United States would uncover weapons of mass destruction in Iraq.

Pentagon officials said Tuesday that experts are examining an Iraqi trailer suspected of being used as a mobile laboratory for chemical weapons.

"I'm not surprised if we begin to uncover the weapons program of Saddam Hussein because he had a weapons program," Bush said. "I will leave the details ... to the experts."