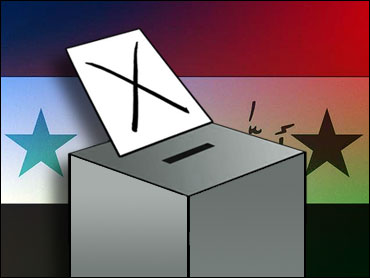 Elections for a new Iraqi government would by possible by the end of 2004 if preparations for them began immediately, a United Nations envoy said in a report released Monday.

Lakhdar Brahimi said there was broad consensus for a provisional government to be formed by June 30. But he also said the preferred U.S. option — for a system of regional caucuses to elect the government — "does not appear to enjoy sufficient support among Iraqis to be a viable option any longer."

Brahimi's report, issued after a U.N. election team went to Baghdad, said Iraq would need at least eight months to prepare credible national elections, and only then if all the conditions for security are met and once a legal framework is agreed on.

U.N. Secretary-General Kofi Annan met with the Japanese leader in Tokyo Monday and also spoke of the future of the U.N. in solving problems in Iraq.

"We both agreed that the electoral issue is extremely important," Annan said at a brief meeting with reporters after emerging from a session with Prime Minister Junichiro Koizumi.

"We need to find a mechanism, working of course with the Iraqis, helping the Iraqis determine a mechanism for establishing an interim or transitional government so that the transfer of power which is anticipated on the 30th of June will go ahead and that we work with them to organize elections in the not-too-distant future."

Annan said re-establishing security in Iraq was a key condition for the world body's involvement.

"The U.N. has always been ready to play its role ... on condition that security will not be an impediment," he said.

Iraq's top Shiite cleric has been pressing for early direct elections before the United States hands over power to Iraqis on June 30.

Both the United States and the United Nations say elections by the end of June are impossible for security and other reasons and are deliberating options for establishing a provisional government to take power.

With most Iraqi leaders opposed to the original U.S. plan to pick a provisional government before the June 30 deadline using regional caucuses, Iraq's Governing Council and American administrators are trying to work out a new method.

The alternative preferred by the United States is to expand the 25-member Governing Council and hand it power on June 30 until elections can be held, according to Washington officials. Though the coalition would hand over power, the United States expects it to keep some 100,000 troops in Iraq for at least another two years.

Most council members are said to support the plan for an expanded council. But some remain in favor of caucuses, and others propose a "national conference" along the lines of Afghanistan's loya jirga, said Salaheddine Muhammad Bahaaeddine, a Sunni Kurd member of the Governing Council. A few still say an early election is possible.