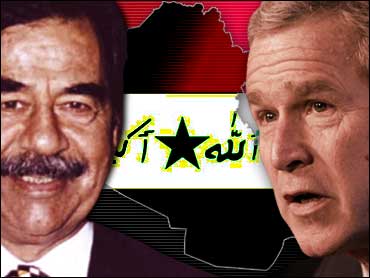 
If a picture is worth a thousand words, how much are photo-ops worth? In politics and diplomacy, they're invaluable.

As Secretary of State Colin Powell entered the United Nations Security Council to hear the crucial report from weapons inspectors Hans Blix and Mohamed El Baradei Friday morning, Gen. Tommy Franks, who would command a war in Iraq, was leaving a National Security Council meeting with the president at the White House.

As Powell worked the diplomatic corps, Franks huddled with the hard core, Defense Secretary Donald Rumsfeld, in full view of the cameras.

Diplomats and soldiers follow very separate roads to Iraq and there is no certainty that they will intersect.

As expected, Blix and El Baradei presented balanced, hedged reports that will do nothing to settle the long debate about whether the time for military action against Iraq has come. On the contrary, each side in that debate will use their interpretation of the reports as more ammunition in the argument.

Each side wanted black and white, but got gray.

France, Germany and Russia focused on signs of increased Iraqi cooperation – allowing U-2 surveillance flights and "private" interviews with scientists – to bolster their campaign to extend the inspections process and avoid military intervention.

Though a U.S.-led military attack could come as soon as early March, there are still some steps left in the diplomatic dance – and the political parade. Here are some non-military manuveurs to watch in the next few weeks:

The U.S. is almost certain to make one final attempt to get the United Nations' formal backing for military action.

At some point after Friday's sessions, the United States and Britain will present a draft resolution to the U.N. that would either authorize military action or find Iraq in "material breach" of its obligations - a diplomatic term of art that is the equivalent of triggering an attack.

A draft resolution could be introduced as early as Saturday, though next week appears more likely. It will be preceded by another round of meetings between Powell and British Foreign Secretary Jack Straw with the three other veto-holding Security Council members - France, Russia and China.

France, working with Russia and Germany, may push for a counter-resolution calling for extending and strengthening the weapons inspections. The French foreign minister has already called for Blix and El Baradei to return to New York on March 14 to present another status report.

On Feb. 18, the U.N. will have an open meeting to give all member countries an opportunity to debate the Iraq crisis.

President Bush, however, has repeatedly stated that he is quite willing to forge a coalition of countries outside of the U.N. to back a military solution. At least 18 countries from Western and Eastern Europe have formally backed the U.S. so far.

NATO and the European Union

The NATO alliance is embroiled in its worst crisis in decades. It is so serious that some observers wonder if the alliance can endure.

The hot spot is this: for four weeks, France, Germany and Belgium have blocked plans to deploy defensive military forces and material to Turkey, the only NATO member that actually borders Iraq.

German officials said that the deadlock would be broken by Saturday, Feb. 15 at the latest, and insisted that Turkey would be defended.

Euro-tensions will have another chance to boil over when the European Union convenes in Brussels on Monday, Feb. 17. British Prime Minister Tony Blair will take point in pushing the Union to back a military option on Iraq.

The conservative leaders of Spain and Italy will be Labourite Blair's key backers. Poland, Hungary, the Czech Republic and 10 other former Soviet Bloc countries support them.

The U.S. received broad European support for it's earlier military actions in the Persian Gulf in 1991, in Kosovo in 1999 and in Afghanistan after 9/11.

That unity has been fractured. Germany, the U.S.'s largest backer on the continent, is now leading the opposition with its perennial rival, France. The countries of Eastern Europe, though, have generally supported America.

For America, 9/11 marked the first attack on its soil buy a foreign enemy since Pearl Harbor, and the first attack on the mainland in nearly two centuries. The threat of terrorism brought on an insecurity that Americans are wholly unused to. In contrast, Western Europe, in a state of perpetual war for most of history, has enjoyed its most peaceful period ever since World War II ended.

The Bush administration has done little better winning American hearts and minds than it has European. Domestic public opinion has been stubbornly unchanged during the prolonged confrontation with Iraq. Americans remain convinced that Saddam is dangerous, that military action is justified, but that it should still only by initiated after there's substantial support from the United Nations.

A CBS News/New York Times poll released Feb. 13 found that 66 percent approve of military action to vanquish Saddam, slightly down from a poll taken immediately after Powell's high-profile presentation to the U.N. Interestingly, that approval figure has changed very little in the past year.

While Americans think military action is justified, a solid majority - 63 percent - want to wait for more support from our allies. This figure has not changed since the fall of 2002. Fifty-six percent think the U.S. should wait for U.N. approval.

Support for military action drops dramatically when respondents are reminded of some potential consequences of war – substantial U.S. casualties, civilian Iraqi casualties and a long occupation of Iraq. And 59 percent believe a war with Iraq will make America more vulnerable to terrorism.

The White House said that Mr. Bush only began to make his case for military action in the State of the Union address last month.

So another crucial development to watch for is a final sales pitch for action by the president.

There is, of course, no guarantee it will come before the first missiles fly.