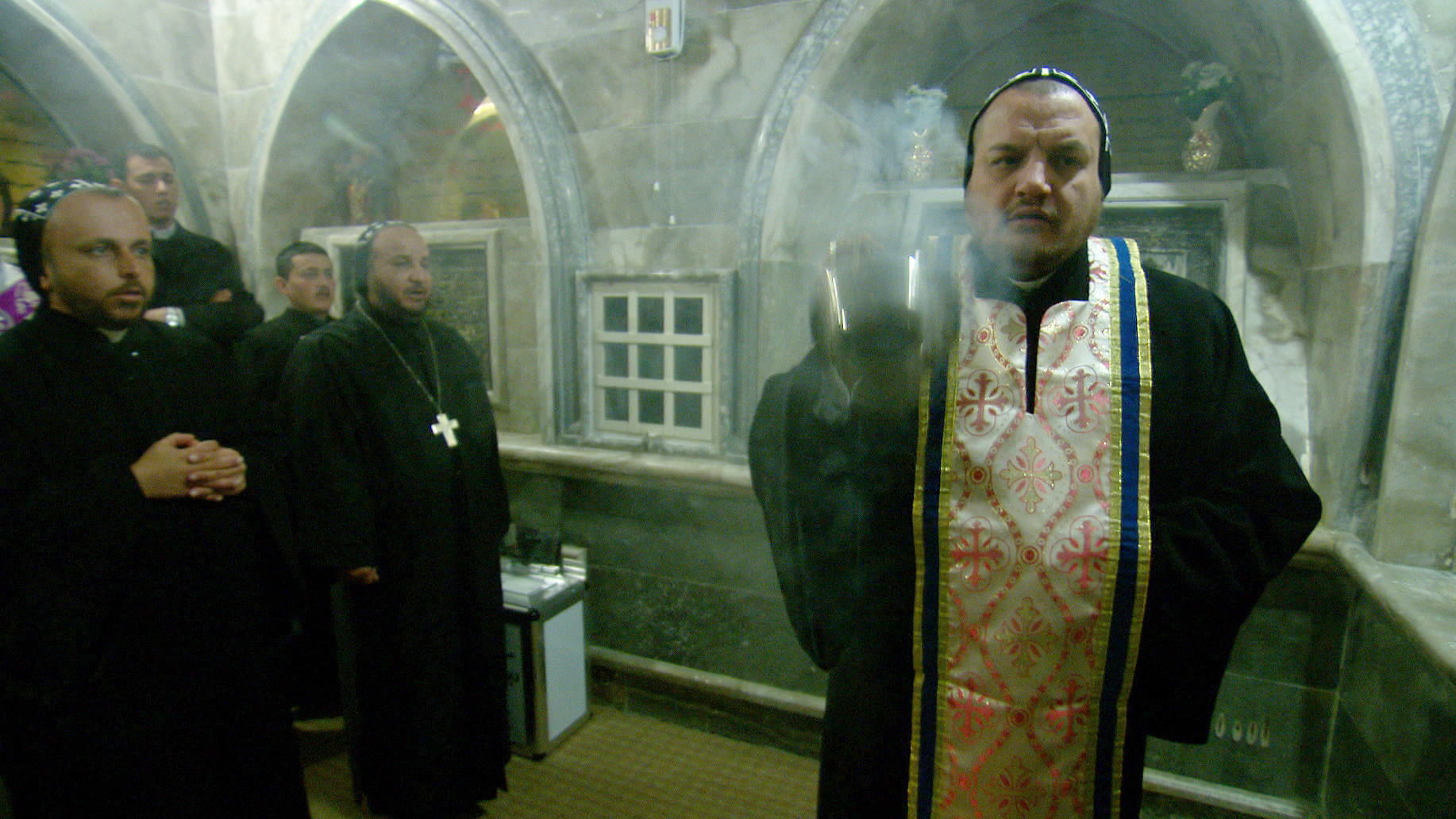 The following script is from "Iraq's Christians" which aired on March 22, 2015. Lara Logan is the correspondent. Max McClellan, Jeff Newton and Richard Butler, producers.

There are few places on earth where Christianity is as old as it is in Iraq. Christians there trace their history to the first century apostles. But today, their existence has been threatened by the terrorist group that calls itself Islamic State. More than 125,000 Christians -- men, women and children -- have been forced from their homes over the last 10 months.

The Islamic State -- or ISIS -- stormed into Iraq's second largest city, Mosul, last summer and took control. From there, it pushed into the neighboring villages and towns across this region, known as the Nineveh Plains, a vast area that's been home to Christians since the first century after Christ. Much of what took almost 2,000 years to build has been lost in a matter of months.

On the side of a mountain, overlooking the Nineveh Plains of ancient Mesopotamia, is the Monastery of St. Matthew. It's one of the oldest on earth.

The voices of its monks have echoed here since the fourth century, uttering prayers that have not changed.

Lara Logan: You do the service in Aramaic?

Lara Logan: Which was the language of Jesus.

Lara Logan: Are you among the last people on earth to speak this language?

Father Joseph Ibrahim: We think so because we kept this language through the language of prayers.

Prayers through centuries of persecution. Father Joseph Ibrahim is one of only seven monks left here. He told us the monastery was founded in 363, and has survived the Persian and Ottoman empires, Mongol invaders and Kurdish conquests. Today, it's threatened by the Islamic State, whose fighters advanced towards St. Matthew's gates shortly after taking Mosul last summer. Kurdish soldiers pushed them back to this village where their flag still flies only four miles from the monastery.

Lara Logan: What are you most afraid of?

Lara Logan: What do you think is going to happen?

Father Joseph Ibrahim: We don't know exactly but we are expecting the worse.

"They take everything from us, but they cannot take the God from our hearts, they cannot."

The road from St. Matthew's brings you to the front line, just six miles from the outskirts of Mosul. Every town and village between here and the occupied city is in the hands of the Islamic State. And now, we're told, for the first time in nearly 2,000 years, there are no Christians left inside Mosul.

Archbishop Nicodemus Sharaf: They take everything from us, but they cannot take the God from our hearts, they cannot.

Nicodemus Sharaf is the Archbishop of the Syriac Orthodox Church in Mosul, one of about 10,000 Christians who fled the city. We found him living as a refugee in the Kurdish capital, Erbil. He said ISIS fighters were already inside Mosul when he escaped.

Archbishop Nicodemus Sharaf: I didn't have any time to take anything. I was told I had five minutes to go. Just I took five books that are very old.

Among them, this Aramaic manuscript. He told us it was written 500 years ago and said he left behind hundreds more older than this one - Christian relics that may never be recovered.

Archbishop Nicodemus Sharaf: I think they burn all the books. And we have books from the first century of the Christianity.

Lara Logan: You had from the first century..

Archbishop Nicodemus Sharaf: Yes, of the Christianity. When I remember this, I cannot ...(crying) from the beginning the Christianity, this is the first time we cannot pray in our churches.

As it seeks to erase Christianity from the landscape, the Islamic state allows no Christian symbols. It just released these photographs which show the desecration of the church at what is believed to be the monastery of Mar Gorgis, just north of Mosul.

And nothing is sacred. ISIS blew up this mosque just over a month after taking here -- it's a site holy to both Christians and Muslims because the Old Testament prophet Jonah was said to be buried inside.

Just like the Nazis marked the property of Jews, Christian homes in Mosul have been marked with this red symbol. It's the Arabic letter N - for Nasara - an early Islamic term for Christians. When ISIS puts it on your home, you either convert to Islam, pay an extortion tax or face the sword.

Issah Al Qurain is one of tens of thousands who had to make that choice. He was at home with his family in the Christian village where he'd lived all his life, when ISIS fighters came looking for him. He told us the fighters first took all his money - then his wife and children.

Issah Al Qurain (translated): Yes, convert. In the beginning, I refused. I told them I was Christian and I had my religion and they had their religion. But they told me, if you don't convert, we will kill you and take your wife and children.

He agreed and was taken to Mosul to convert where he was reunited with his family. Soon, ISIS fighters were asking about his young daughter, and he told us that frightened him more than anything.

Issah Al Qurain (translated): They said to me that in Islam, the Sharia says, girls that are 10 years old should get married. As soon as they left, my wife and I shut the door. We looked at each other and she started to cry and pray. We were so scared they were going to take our daughter from us.

They escaped in the back of a taxi. Issah says they talked their way through three ISIS checkpoints and traveled for over four hours on back roads to Erbil where, like Archbishop Sharaf, they now live as refugees.

Some 30,000 Christians were living in Erbil before this crisis, most of them Chaldean Catholics, who follow their own ancient traditions but recognize the authority of the pope. Bashar Warda is the archbishop of this diocese. He says his congregation has swelled by more than 60,000 refugees...as Kurdistan, the semi-autonomous region in the north of Iraq, has become a safe haven for Christians fleeing the Islamic state.

Lara Logan: This is one of the oldest Christian communities in the world? Thousands of years old.

Lara Logan: And when you look at it today, where is that Christian community here?

Archbishop Warda said Christians in Iraq ironically felt safer under Saddam Hussein. Democracy brought a new wave of persecution and prompted a mass exodus of Christians. When the U.S. withdrew completely in 2011, Archbishop Warda says the situation became even worse because Iraq's new leaders were incapable of governing without help.

Archbishop Bashar Warda: I think American support was needed, needed forcefully. You cannot leave the country like this and tell them, "Well, we've liberated you. We cannot do the job for you and we are walking away. This is your country, rule it."

Archbishop Bashar Warda: Yes. It's not blaming, but that's the reality. This is not what you came for in 2003. The 4,000 sacrifices of the American soldiers was not meant to come to this day.

Christianity in Iraq was born in the towns and villages of the Nineveh Plains, like this one, called Tel Isqof, which lies less than 20 miles north of Mosul.

Christians have lived here and walked these streets for over a thousand years. But today, there's no one - they're all gone. Driven out by fear. And one of the most striking things you notice is the silence.

Every road was deserted. Houses and possessions abandoned. Others destroyed. Tel Isqof had always been a refuge for Iraq's Christians, until last August when ISIS moved in and 7,000 Christians fled. Three weeks later, Kurdish soldiers pushed the terrorists out.

But Father Rony Hana says ISIS instilled such fear here that his people won't come back. He worries, too, but returns for a few hours every morning to check on his church, which he said ISIS fighters used as their base. He told us one of them called him on his cell phone to ask how to operate the church generator.

Lara Logan: They really did, they asked you that? And you told them?

"I guided them to where it was located around the corner from here," he told us, "and explained how to turn it on. The last thing I said was to please take care of the church and they just hung up."

The cleansing of Iraq's Christians from this land is something Archbishop Sharaf believes ought to be generating a much louder cry of outrage from his Muslim friends and neighbors.

Archbishop Nicodemus Sharaf: Speak up. Of course, there is good people of the Islam people. There is not all Muslim people they are bad. I believe. But there is the good people? Where is their voice? Nothing. Few. Few.

Lara Logan: With everything that has happened here to the Christians, what has been lost?

Archbishop Nicodemus Sharaf: They lost our dignity here. I'm sorry to say that. We don't have dignity in our country, in our land.

Most everyone we met welcomed U.S.-led airstrikes here, but they also said it is not nearly enough. Taking back Mosul - a city of about 1.5 million people -- is widely understood to be a difficult prospect. Archbishop Warda believes the Iraqi army can't do it alone and as long as the city remains in the hands of ISIS - who he refers to as Da'esh, its Arabic name -- no Christians will be going home.

Archbishop Bashar Warda: For me, Da'esh is a cancer. It's a disease. So sometimes you take some hard measures, unfortunate measures to deal and to treat this cancer.

Lara Logan: So you want to see a major military offensive to retake Mosul?

Archbishop Bashar Warda: Yea, to get Iraq to its normal situation.

Lara Logan: And by getting Iraq to its normal situation, you mean restoring the border between Iraq and Syria?

Lara Logan: Getting rid of Da'esh, the Islamic State?

The Christian community hastily set up militias to guard their deserted villages and homes along the frontline, and they're getting a little help. We were surprised to come across American Brett Felton, a Christian veteran of the Iraq war, who traveled -- on his own -- from Detroit to train Christian volunteers. And this man, Khamis, who said he came from Australia, driven to defend the land where he was born.

Lara Logan: What do you think the Islamic State intends to do with the Christians here?

Khamis: To wipe them out. To be nothing. No place left that bears the name of Christian or Christianity.

Christians in the frontier town of al Qosh live in the shadow of the Islamic State. Under constant threat, the militiamen keep watch as they celebrate their faith ... and carry out traditions that are as old as Christianity on the Nineveh Plains.

Hungary paying citizens to have babies