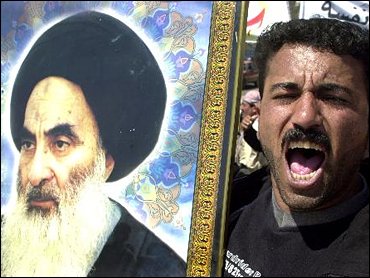 Iraq's most powerful Shiite cleric arrived home from Britain on Wednesday and his aides called for a nationwide march to Najaf to end nearly three weeks of fierce fighting between U.S. forces and Shiite militants in this holy city.

The announcement came as heavy fighting persisted in Najaf's Old City, the center of much of the past three weeks of clashes. U.S. warplanes fired on the neighborhood, helicopters flew overhead and heavy gunfire was heard in the streets, witnesses said.

Grand Ayatollah Ali Husseini al-Sistani, 73, has been in London for medical treatment since Aug. 6, one day after clashes erupted in Najaf. The cleric wields enormous influence among Shiite Iraqis and his return could play a crucial role in stabilizing the crisis.

Al-Sistani crossed into southern Iraq from Kuwait about midday in a caravan of sport utility vehicles accompanied by Iraqi police and national guardsmen, according to an Associated Press reporter with the convoy. The convoy stopped in the southern city of Basra.

Al-Sistani was headed to Najaf "to stop the bloodshed," said Al-Sayyid Murtadha Al-Kashmiri, an al-Sistani representative in London. The cleric will arrive in the violence-wracked city Thursday and "those believers who wish to join him, let them join," he said.

There are already reports of Shiites piling on buses in Baghdad to head to Najaf, reports CBS News Correspondent Elaine Cobbe.