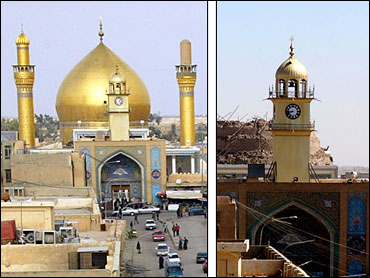 The attack stoked fears of an upsurge in intra-Muslim violence. Prime Minister Nouri al-Maliki's government asked for U.S. troop reinforcements in Samarra, 60 miles north of here, and for a heightened U.S. military alert in the capital.

But within hours, three Sunni mosques south of Baghdad went up in flames, reports CBS News chief foreign correspondent Lara Logan, and attackers set fire to three more mosques in the capital itself.

The Golden Dome bombing in February 2006, at one of Iraqi Shiites' holiest sites, unleashed a bloodbath of reprisals — of Shiite death-squad murders of Sunnis, and Sunni bombing attacks on Shiites. At least 34,000 civilians died in last year's violence, the United Nations reported.

How the attackers evaded the Askariya shrine's guard force, strengthened considerably after the 2006 bombing, was a mystery.

The attack comes just a day before all U.S. combat forces for the troop surge are set to be in position, adds Logan. Al Qaeda is showing that it can still seize the initiative and undermine U.S. promises to provide security.

Al-Maliki quickly imposed an indefinite curfew on vehicle traffic and large gatherings in Baghdad, sending residents rushing to their cars to get out of the city before the curfew came into effect. Traffic on bridges out of the city was heavily congested.

Al-Maliki said policemen at the shrine were later detained for questioning in the investigation, and the Interior Ministry said members of "a terrorist group," in addition to the policemen, were arrested in Samarra and were being interrogated in connection with the shrine attack. It did not elaborate.

The Wednesday morning blasts shook the Tigris River-side city of Samarra, sending a cloud of dust billowing into the air, said Imad Nagi, a storeowner 100 yards from the shrine. "After the dust settled, I couldn't see the minarets any more. So, I closed the shop quickly and went home."

Said nearby blacksmith shop owner Farouq al-Samaraie: "I didn't expect there would be another explosion at al-Askariya mosque because it was already attacked last year."

Resident Abdul-Khali Mohammed predicted violence in the capital: "The Shiite militias now will seize this opportunity to kill Sunni families in Baghdad."

An indefinite curfew was immediately imposed on Samarra and, as Iraqi army and police reinforcements and U.S. troops poured in, the streets emptied by mid-afternoon, witnesses said.

A few hundred U.S. soldiers had been stationed around Samarra but had left shrine security to Iraqi forces.

It wasn't immediately clear how the attackers evaded the shrine's guard force, which had been strengthened after the 2006 bombing. 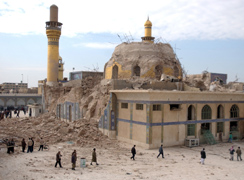 (AP Photo/Hamid Rashid)
The Askariya shrine's dome was destroyed on Feb. 22, 2006, in a bombing blamed on Sunni Muslim militants believed linked to al Qaeda. The mosque compound and minarets had remained intact but closed after that bombing.