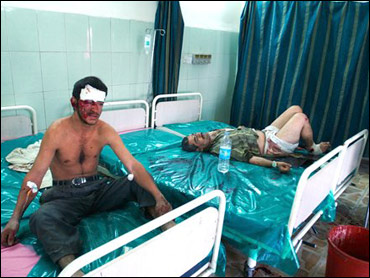 Three suicide car bombings struck within an hour and two parked motorcycles exploded in northern Iraq on Thursday, while gunmen in speeding cars opened fire on a crowded market in Baghdad in a series of rapid-fire attacks that killed at least 38 people.

Continuing violence during the past days has claimed the lives of at least four children, two U.S. soldiers and a Sunni Muslim cleric, underscoring the rampant, random nature of an insurgency that has killed at least 810 people since the April 28 announcement of Iraq's new Shiite-led government, according to an Associated Press count.

Twenty people were killed as a wide swath of northern Iraq was hit by three suicide bombings within an hour.

A suicide bomber struck a restaurant in Tuz Khormato, 55 miles south of the northern city of Kirkuk, during breakfast hours Thursday, killing at least 12 people, including a bodyguard of Iraq's Kurdish deputy prime minister, Rowsch Nouri Shaways, and wounding 40, according to the Iraqi Defense Ministry and police.

The blast set ablaze eight cars in the restaurant's parking lot, the focal point of a bloody, rubble-strewn scene that U.S. and Iraqi police quickly cordoned off. Shards of glass, shoes and splattered breakfast meals covered the restaurant's floor as emergency workers raced around overturned tables and wooden chairs in a bid to treat the casualties. Ambulances and pickup trucks ferried bloodied bodies and mutilated corpses away.

In Kirkuk, a suicide car bomber targeting a convoy of Toyota Land Cruisers carrying civilian contractors killed four Iraqi bystanders and wounded at least 11 others, said Dr. Bassam Mohammed of Kirkuk Emergency Hospital. None of the occupants in the convoy was injured, although one vehicle was damaged, the U.S. military said.

"My 5-year-old boy Ayad and I were passing by the car bomb exploded and the blast killed him," Robert Jerges, the child's father, said. "Why did I lose my child? why did he deserve this?"

"There were no security targets there, they were all civilians," Defense Ministry spokesman Radhi Badir said. "They were shooting randomly, shooting at shops in the bazaar."

An announcement released by the Defense and Interior Ministries Thursday said "an armed group in three cars opened fire in the al-Hurriyah district, martyring nine civilians."

"I was sitting inside my restaurant when about six cars parked nearby and their passengers came inside and ordered food," said restaurant owner Ahmed al-Dawoudi. "Seconds later, I heard a big explosion and the restaurant was turned into twisted wreckage and rubble. Blood and pieces of flesh were everywhere."

Shaways was not at the restaurant at the time of the blast. Kurds, who want oil-rich Kirkuk to be part of their autonomous Kurdistan region, have been regularly targeted by insurgents.

A roadside bomb blast Thursday forced a car off the road in Mahmoudiya, about 20 miles south of Baghdad, killing three passengers and wounding three others, Yarmouk Hospital Dr. Shebab al-Neimi.

Militants also attacked an Iraqi police patrol with gunfire and a car bomb, killing a female bystander, plus wounding a civilian and a policeman in Baghdad's southern Dora district, police Lt. Majid Zaki said. Police captured the insurgents, however, and raided a car bomb-making workshop south of Baghdad.