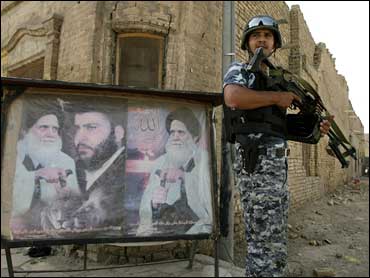 The explosion occurred as a car carrying Saleh al-Auqaeili passed about 200 yards from an Iraqi army checkpoint in a heavily secured area near Baghdad's main Shiite district of Sadr City, according to one of his colleagues.

Al-Auqaeili was taken to a hospital in Baghdad, where he later died of his wounds, according to Sadrist spokesman Ahmed al-Massoudi and a fellow lawmaker, Hassan al-Rubaie.

Al-Auqaeili was a senior member of al-Sadr political bloc, which has 30 seats in the 275-member parliament. The Shiite cleric's cease-fire order to his militia has been a key factor in a sharp decline in violence over the past year.

The attack raised concerns that internal rivalries within Shiite and Sunni political groupings could emerge ahead of upcoming provincial elections as a major threat to Iraq's stability, even as sectarian violence ebbs.

Another Sadrist lawmaker, who spoke on condition of anonymity because he was not supposed to disciss sensitive political issues, said al-Auqaeili was known for his moderate stance in a movement with subgroups that have promoted violence.

The U.S. military blamed Shiite extremists for the attack, which occurred shortly before 10 a.m.

Several followers of al-Sadr have been targeted in past attacks, but Thursday's bombing was notable because it occurred within a section of Sadr City that is considered secured by the U.S. military.

Falah Hassan Shanshal, who was riding in a different car in the same convoy, said the group became suspicious when discovering there were no traffic jams in the usually crowded area. He said the "operation was a pre-planned one" and that the explosion was remote-controlled.

What made them suspicious was that it took place near a checkpoint, he said. "The area is supposed to be a protected one."

AP Television News footage showed the charred hulk of a motorcycle and the white SUV that apparently was carrying the officials on a road lined with a powder blue concrete wall erected by the U.S. military to protect the area.

Iraqi police initially said the blast was caused by a motorcycle bomb. But Shanshal said the explosives had been planted in a hole near the road. He said a man on a motorcycle was killed, causing the confusion over the cause of the blast.

An Interior Ministry official, who declined to be identified because he wasn't authorized to release the information, confirmed it was a roadside bomb and said earlier that two other people were killed in the blast.

Also earlier, Maj. Mark Cheadle, a spokesman for U.S. forces in Baghdad, said the blast killed one civilian who was riding by on a motorcycle and wounded three other people in a car.

"The extremists have not ceased their attempt to erode the gains made in this area of Baghdad," Cheadle said, promising that the U.S. and Iraqi security forces "will not cease to hunt them and bring them to justice."

Sadr City and surrounding areas were long dominated by al-Sadr's Mahdi Army militia and were the site of fierce clashes between U.S.-Iraqi forces and Shiite extremists earlier this year. The area has been relatively peaceful after al-Sadr declared his cease-fire and the Iraqi security forces assumed control in late May.

But tensions have been rising over the U.S.-Iraqi security talks on a deal that would replace the U.N. mandate for American forces, which expires at the end of the year.

Al-Sadr, who is believed to live in Iran but retains significant political clout in Iraq, strongly opposes the U.S. military presence. He and other critics fear that the new pact will bind the U.S. and Iraq in a long-term relationship, instead of restoring Iraqi sovereignty.

Al-Massoudi, the Sadrist spokesman, accused the Americans of targeting those who opposed the deal. "The occupation forces sent us a message by staging this attack because of our stance against the agreement," he said.

However, the ministry stressed those blasts were some distance away from the heavily secured compound.