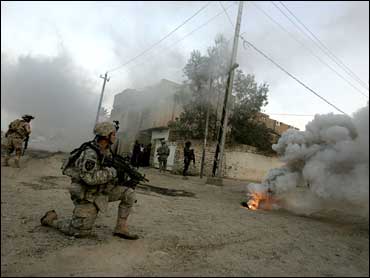 Iraqi authorities said a suicide truck bombing killed at least a dozen people Monday in a town north of Baghdad, hours after a roadside blast targeting a patrol near the Iranian border killed two Iraqi soldiers.

The suicide bomber drove a truck rigged with explosives into a checkpoint manned by members of a U.S.-backed volunteer security group, killing at least 12 people, police and a member of the volunteer group said.

Another three people were missing, believed blown up in the explosion in the town of Mishada, 20 miles north of the capital, on part of the main highway linking Baghdad to northern Iraq, according a police officer and Adil al-Mishhadani, a member of the volunteer group. The groups - mainly Sunni tribal fighters who turned against al Qaeda in Iraq earlier this year - have been credited with helping reduce overall violence in the country by 60 percent since June.

The attack occurred shortly after dawn in the frontier town of Mandali, about 30 miles from the Iranian border in Diyala province northeast of Baghdad, a police officer said on condition of anonymity because he was not authorized to release information to the media.

Diyala has become one of Iraq's most dangerous areas. Most of the activities of al Qaeda in Iraq have been pushed out of Anbar province and Baghdad into Diyala and the northern city of Mosul, following a surge of U.S. troops in Baghdad and the work of Sunni tribal groups.

"Diyala has been one of the tougher fights," U.S. Navy Rear Adm. Gregory Smith said in Baghdad Sunday. "Diyala is an area of significant interest for al Qaeda."

Overall, the country has seen a 60 percent decline in violence, U.S. military officials have said. The fall is attributed to a combination of the surge, a cease-fire declared by radical Shiite extremist Muqtada al-Sadr for his Mahdi Army militia and the growth of the Awakening Councils, the mainly Sunni tribal groups that have turned against al Qaeda in Iraq.

"We realize that security in Iraq is very fragile and tenuous," Smith said. Although much progress had been made since thousands of extra U.S. troops deployed in June, "there is no place in Iraq today that is safe from terrorism."