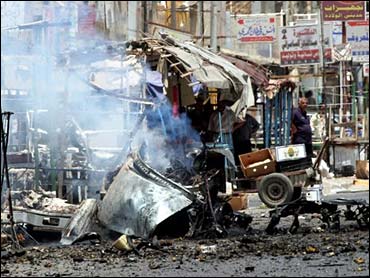 At least nine Iraqis were killed in an overnight suicide bombing in a remote village north of Baghdad, officials said Friday, taking the number of people killed during a bloody day of violence in Iraq to almost 50.

"I was among 50 people inside the tekiya (Sufi gathering place) practicing our rites when the building was hit by a big explosion," said Ahmed Hamid, one of the Sufis, who are regarded as heretics by Islamic extremists believed responsible for suicide bombings. "Then, there was chaos everywhere and human flesh scattered all over the place."

Thursday's carnage claimed the lives of at least 48 people, including more than 30 in four suicide bombings across the country's north and a Shiite cleric in the southern city of Basra.

At least 825 people, including U.S. forces, have been killed since the new Shiite-led government was announced April 28, underscoring the fragility of this country's reconstruction.

Iraq's Interior Minister Bayan Jabr on Thursday claimed the government offensive seeking to root out kidnappers and other militants in Baghdad had scored big gains, saying this week's sweep by Iraqi soldiers and police captured 700 suspected insurgents and killed 28 militants.

But the incessant violence launched by a host of militants, from Islamic extremists to Saddam Hussein loyalists, highlights how far security authorities need to go to stop the killings.