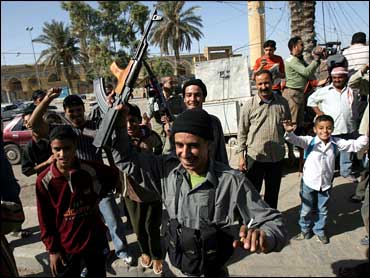 Meanwhile, police said a suicide bomber killed at least six people, including one child, in northern Iraq, and the U.S. military announced the death of a soldier in an explosion in Diyala province.

A leader of one of the so-called awakening councils - Sunni tribesmen fighting to oust al Qaeda from their hometowns - told Al-Jazeera television on Wednesday that U.S. soldiers had killed dozens of his fighters during a 12-hour battle near Taji.

"The raids continued for more than 12 hours... despite the fact that, right from the first attack last night, we have continuously been contacting American commanders that they are hitting us, their friends," said Mansour Abid Salim of the Taji Awakening Council.

"The scene was horrible with corpses dotting the area, bodies cut into pieces by shelling," he said.

U.S. officials said American soldiers killed 25 fighters and captured 21 in a battle that began late Tuesday after gunmen were seen "in the target area" where suspected al Qaeda militants were believed hiding.

Large quantities of weapons including anti-aircraft guns and surface-to-surface missiles were seized, the U.S. said, adding that the raids targeted "senior terrorist leaders."

The U.S. has said the growth of such awakening councils have been key to a sharp drop in violence in recent months, since a U.S. troop buildup of some 30,000 reinforcements.