CBS News correspondent Elizabeth Palmer, reports that Saturday's crowd was 2,000 to 3,000 strong, but many of the young people who wanted to join in were turned back by the police before they got anywhere close. Eventually, the threat of more violence forced the protestors to retreat and scatter – but it was a remarkable show of defiance. 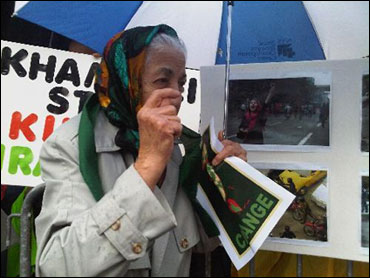 (CBS/Hari Sreenivasan)
An elderly Iranian woman at a demonstration outside United Nations headquarters in New York protesting the recent Iranian presidential election, June 20, 2009. Video of demonstration in Washington,D.C. on June 20 below.

Updated 4:10 p.m. Eastern: Video: Clashes in the streets of Tehran

With the tensions rising in Tehran, President Obama offered a statement today:

"The Iranian government must understand that the world is watching. We mourn each and every innocent life that is lost. We call on the Iranian government to stop all violent and unjust actions against its own people. The universal rights to assembly and free speech must be respected, and the United States stands with all who seek to exercise those rights.

"As I said in Cairo, suppressing ideas never succeeds in making them go away. The Iranian people will ultimately judge the actions of their own government. If the Iranian government seeks the respect of the international community, it must respect the dignity of its own people and govern through consent, not coercion.

"Martin Luther King once said - "The arc of the moral universe is long, but it bends toward justice." I believe that. The international community believes that. And right now, we are bearing witness to the Iranian peoples' belief in that truth, and we will continue to bear witness."

In an interview Friday with CBS News' Harry Smith, Mr. Obama more directly addressed criticisms regarding his tone that was too soft. Senator John McCain, for example, said, "People are being killed and beaten in the streets of Tehran and all over Iran, and we should stand up for them," he told FOX News. "The way we stood up for the Polish workers in Gdansk, the way we stood up for the people of then Czechoslovakia in the Prague Spring and we have stood up for freedom in every part of the world. We're not doing that."

In a nutshell, Mr. Obama doesn't want to provide the Iranian government with the ammunition to make the U.S. a bad actor in his play, interfering with the Iranian political process. He told Harry Smith:

" ...the last thing that I want to do is to have the United States be a foil for those forces inside Iran who would love nothing better than to make this an argument about the United States. That's what they do. That's what we've already seen. We shouldn't be playing into that. There should be no distractions from the fact that the Iranian people are seeking to let their voices be heard.

"Now, what we can do is bear witness and say to the world that the, you know, incredible demonstrations that we've seen is a testimony to, I think what Dr. King called the the arc of the moral universe. It's long but it bends towards justice."

Mr. Obama is walking a fine line, but there is a line he doesn't want to cross--to have the U.S. viewed as fomenting discontent in other countries-- but it will be difficult not to take advantage of the opportunity to effect change as the youth of Iran, three-quarters under the age of 30, seek some changes.

Updated 1:45 p.m. Eastern: Update from the Twittersphere; reports of Mousavi speaking about martyrdom

On Twitter, there are unconfirmed reports that Mir Hossein Mousavi spoke to protesters on Jeyhoon Street, saying that he is prepared for martyrdom and shame on the government for it tricks. He is also reported to have said, "If I am arrested, the nation is to strike indefinitely"--also unconfirmed.

Twitterers are giving advice for dealing with tear gas.

There are also unconfirmed tweets of helicopters pouring acid on people from the sky; riots in Tabriz, Mashad, Isfahan and Ahwaz; foreign embassies and hospitals accepting injured protesters; and calls for the "sea of green" to march.

Another video graphically illustrates the ultimate bad outcome of the situation in Iran.

CNN reports that the explosion that Iran state television said killed one and injured several people at shrine of Ayatollah Sayed Ali Khamenei may have been a suicide bomber. It was not totally unexpected that violence would escalate on all sides, in this case from extremists opposing the current government in Iran. However, with the press black out, it is not possible to verify the reports.

Here is our latest story on the what is happening in Tehran today.

Spokesman of Iran's electoral watchdog the Guardians Council Abbas Ali Kadkhodaie has expressed its readiness to randomly recount up to 10 percent of ballot boxes from last week's disputed presidential election in the presence of the representatives of the candidates.

He said although the Guardian Council is not legally obliged to make the recount, which would occur in the presence of representatives of the three defeated candidates. Kadkhodaie said the council has up to Wednesday to give its final decision, but there is no obligation to wait until Wednesday.

"Whenever our examination is finished and the recount is conducted, we can announce our final say," Khadkhodai said.

He said Mir Hossein Mousavi and Mehdi Karroubi, the two defeated candidates who did not attend a meeting with the council on Saturday, still have time until Wednesday to discuss the matter. The other losing candidate Mohsen Rezai, the ex-head of the Revolutionary Guards Corps, was the sole complainant who attended the meeting.

CBS News correspondent Elizabeth Palmer, one of the last remaining Western journalists in Tehran, reports that people gathering in Tehran's center have been met by a heavy police presence. She heard sounds of what could be gunfire or tear gas being fired where crowds of protestors would have gathered in Tehran today.

Palmer termed the crowds of protestors as "large" but impossible to put a figure on it. Traffic jams made movement difficult, and Palmer, who passed groups of people moving towards the site of a planned protest today, said it would be easy to be trapped.

Supporters of opposition leader Mir Hossein Mousavi are rallying in Tehran in open defiance of the country's supreme leader who threatened harsh action if protestors take to the streets again demanding a new presidential election.

The Associated Press reported police using tear gas and water cannons to disperse thousands of protesters, according to witnesses.

Iran state television reports that a bomb exploded, killing one and injuring several people at shrine of Ayatollah Sayed Ali Khamenei, the leader of the 1979 revolution in Iran. With the foreign press black out, it's difficult to verify the incident.

AP is reporting that Iranian security forces are using tear gas and water cannon to disperse the crowds.

According to eye witnesses, supporters of Tehran opposition leader Mir Hossein Mousavi are participating in small rallies despite the threats of "severe punishment" from Iranian security forces.

Fire trucks are present at Revolution Square, where protesters planned to gather, and riot police surrounded Tehran University, according to a witness.

So far Mousavi has not issued a public statement, AP reported.

"Everyone who orchestrate such activities will be prosecuted."

"Any illegal congregation, demonstration without permission will be severely dealt with."

The protesters in Iran are not only trying to take to the streets and use the Internet to make their case via text messages, photos and video clips. Some of the more musically-inclined protesters have created music-enhanced videos posted on Facebook, YouTube and other sites. One video on Facebook has lyrics in response to comments made by Mahmoud Ahmadinejad and Ayatollah Khamenei over the last couple of days in regard to the protesters. The writing on the signs held by young people at the beginning of the video says that the protesters are not "rioters" or "thugs." It maintains that the people of Iran are gathered not to cause chaos or to give them the government the right to beat up sisters and brothers in the name of rioters and shed their blood. "Would you treat your own sisters and brothers in this way? In this the meaning of absolute freedom," they ask.

At this juncture, the press must get written permission to cover what is happening today in Iran. According to some Twitter reports, Mousavi walked from Ettelaat to the Ministry of Interior, with thousands with him, but the squares are apparently blocked off. Check the #iranelection tag on Twitter. CBS News has not been able to verify this information. 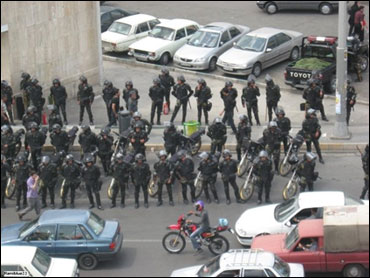 (Tazahorate Ma)
A photo provided via a Web blog, purported shows police forces amassing in the streets of Tehran, Saturday, June 20, 2009, in advance of a planned protest by opposition supporters.

The situation in Iran is expected to take a decisive turn today. The potential for violence is extremely high between authorities and supporters of opposition leader Mir Hossein Mousavi. Iran has been in an even more severe media lockdown in response to the protest rallies, which are scheduled for 4:00 PM Iranian time (7:30 AM ET). Iranian television has been showing business and sports reports, as well as art and cultural documentaries.

Mousavi's supporters had planned a massive rally in Tehran later Saturday. But it was unclear if the rally was going forward, if Mousavi would attend, or how large it would be, after Supreme Leader Ayatollah Ali Khamenei ordered opposition leaders on Friday to end street protests or be held responsible for any "bloodshed and chaos" to come.

A top Iran police official, Ahmad Reza Radan, warned Mousavi Saturday that if people take to the streets, "their leaders will be arrested."

CBS News correspondent Elizabeth Palmer, one of the last remaining American journalists in Tehran, reports that the city has been quiet today, but that there is beginning to be a heavy police presence in the center of Tehran.

"If anything, there is even less traffic than usual. Everybody is wondering what the opposition is going to do after the Supreme Leader's warning yesterday that the protests must stop."

There have been conflicting messages on whether or not there is going to be a march Saturday, Palmer reports. Zahra Rahnavard, the wife of Mousavi, said online this morning that she would be there, so by implication there will be a march.

One of Mousavi's Web sites said he planned to issue a statement "soon." It did not elaborate.