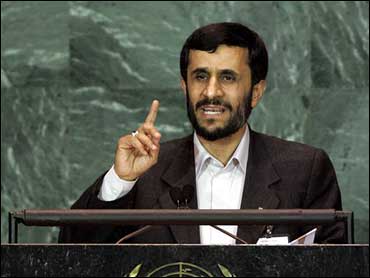 
Every fall the U.N. General Assembly begins a new session. This year, President Bush came to New York to meet with other leaders from around the world hoping to make great strides in reforming the United Nations itself.

Looking at the modest reform package finally agreed on by the 191 member countries, one senior official said the administration was "genuinely content" with what had been achieved, but more tellingly followed that with "is it the kind of thing we'll trumpet years from now? Probably not."

While U.N. reform is important to the Bush administration and its conservative base, it is especially important to Congress. However, it was not the hottest topic in town, according to American diplomats.

On the important issue of dealing with Iran's nuclear intentions Secretary of State Condoleezza Rice and her senior aides think they made some progress. Rice told reporters there was "broad disappointment" with the speech made by Iran's new President, Mahmoud Ahmadinejad, before the U.N. General Assembly.

"I don't think there is any disagreement there are concerns about Iran's nuclear activity," Rice said.

How to get Iran to halt work on its nuclear programs is not something the Bush administration was able to get consensus on during its meetings in New York. Secretary Rice kept up the administration's mantra that if Iran doesn't return to talks with European negotiators (the so-called EU 3 of Germany, France and Great Britain), its lack of compliance with prior agreements should cause Iran to be brought before the Security Council and face possible sanctions. The only problem — Russia, China and India were not buying — at least not now.

Iran's Ahmadinejad laid new proposals before the United Nations, declaring his country had a right to a civilian nuclear fuel program. Trying to convince others that Tehran had no ill intentions, he said "in accordance with our religious principles, pursuit of nuclear weapons is prohibited."

Secretary Rice wasn't moved. "The problem is that Iran's behavior in the past concerning its IAEA (International Atomic Energy Agency) obligations have left the world with a lack of confidence in Iran's willingness to live up to those obligations," Rice said.

Gauging reaction to the Iranian leader's remarks, a Senior State Department official said the next day after meeting with diplomats from many countries that "people were impressed by how harsh and uncompromising" the speech was.

"From the speech he doesn't want to negotiate with the EU 3," said the senior official, predicting the impact would be "negative on the Iranians."

Another Senior State Department official, referring to Venezuela's president who is on the outs with the Bush administration, dismissed the Iranian's approach by saying Ahmadinejad "behaved like a Persian Hugo Chavez, and it didn't sell."

Whether or not Rice and her aides have judged the week's diplomacy on Iran correctly will take more time to play out. The United Nation's nuclear watchdog group, the International Atomic Energy Agency, will debate Iran's compliance or lack thereof with its obligations, perhaps referring the matter to the Security Council to consider possible sanctions against Iran.

Several weeks or even several months from now the diplomatic dust may settle on a new course of action to contain what the Bush administration sees as Iran's nuclear ambition. Until then we will hear the incessant drumbeat of claims and counterclaims from both Washington and Tehran.