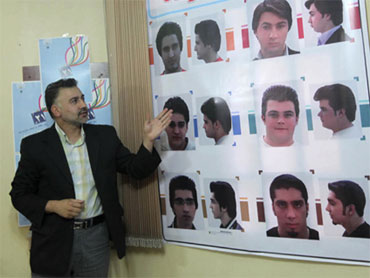 First there was bad hejab for women.

For Iranian young people opposed to the regime, it's a badge of honor to break the rules, and this is one more rule to break.

Liberal young women have been defying dress code for years.

They wear dramatic - and very unIslamic - makeup in public. They push their scarves back to show plenty of hair, and their light overcoats - supposed to be worn loose for modesty - are skin tight.

Men are supposed to dress modestly too, and it's true none of them would wear shorts in public, even in the blazing summer heat of Tehran. But generally the rules for them have been less defined. Until now.

But the Ministry of Culture hasn't decided to go after their tight Western jeans.

For some reason, the new taboo will be hair - the ponytailed/spiked/quiffed/coiffed-with-gel look beloved by so many young Iranian men, especially the urban and the well-off.

The "decadent" dos won't be outright illegal - but under new guidelines they will be "discouraged" in favour of short-back-and-sides.

In theory, that means Iran's special Islamic morality police will have grounds to stop and fine young men whose hair they don't like.

In practice, it probably means that after a flurry of publicity on Iranian state TV, the new bad-hair rules for men will be quietly ignored.

Like so many other regulations drawn up by this unstable government to disguise dissent, they are unenforceable.