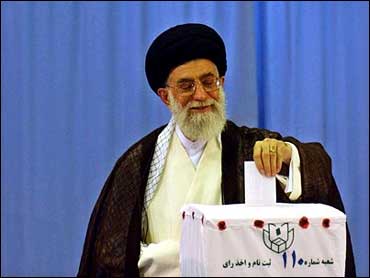 Iranians voted Friday in a high-stakes election shaping up as the closest presidential race since the 1979 Islamic Revolution, with young people disillusioned with the cleric-run system calling for an election boycott.

The election carries added significance since the next president will influence Iran's negotiations with the West over its nuclear program, and will have a say about the nation's role as a patron of the Shiite Muslim majority in neighboring Iraq.

None of the seven candidates is expected to get the 50 percent support needed to win outright, meaning the two top vote-getters will likely meet in a runoff. Iran's previous presidential elections after the revolution were all won in the first round.

The front-runner in Friday's vote is cleric Hashemi Rafsanjani, who was president from 1989 to 1997.

On the eve of the vote, President Bush criticized the election as illegitimate, saying it was designed to keep a power in the hands of a few.

"The Iranian people deserve a genuinely democratic system in which elections are honest — and in which their leaders answer to them instead of the other way around," he said in a statement released by the White House.

Hard-line clerics loyal to supreme leader Ayatollah Ali Khamenei have broad powers over Iran's elected leaders and thwarted many of the reforms attempted by the outgoing president.

Nagi Hassani, a 49-year-old shopkeeper from western Tehran, wasn't taking any chances that he might get lost in the voting crowds and turned up to vote one hour before the polling stations opened. He waved his birth certificate at an Associated Press reporter in western Tehran saying "I want to be the first one to vote."

Iran's official television showed long lines outside polling stations but there was no independent indication of the early voter turnout.

Outgoing President Mohammed Khatami disappointed Iran's young, who put him in power in two successive elections, by backing down on promised reforms and buckling to pressure from the hard-liners among Iran's powerful clerics. He told a press conference that he hoped for a high voter turnout and said it would strengthen both stability and democracy in Iran.

"I hope the next president will come with development in mind," he said.

Rafsanjani has portrayed himself as the most experienced figure to handle the sensitive nuclear talks. Washington claims Iran seeks nuclear arms, but Iran say the program is only for energy production.

"I hope we have a fair election, free of manipulation," Rafsanjani said.

Activists opposing Iran's theocracy called for an election boycott. But Khamenei also urged the 46.7 million eligible voters to flood the 41,000 polling stations to silence critics, led by the United States and pro-reform forces in Iran.

"They don't want an Islam to have a real democratic system," said Khamenei, who directs the non-elected theocracy whose powers dwarf both the presidency and parliament.

Rafsanjani is expected to receive about 45 percent of the vote, short of the mark needed to claim victory, according to campaign manager Mohammed Atrianfar.

Second place would appear to be a contest between a Khatami protege, former Culture Minister Mostafa Moin, 54, and a former police chief, Mohammad Bagher Qalibaf, 44, who appeals to conservatives. But they share one trait: seeking to become the first non-cleric president since Mohammad Ali Rajai was assassinated in 1981.

Moin, the leading reformist candidate, could be hurt by a boycott called by students who are disillusioned about the prospect of change.

Ray Takeyh, a senior fellow at the Council on Foreign Relations in New York, said the campaign "has brought out some of the fault lines within the conservative camps."

Clerics warned the four conservative candidates that they risked splitting the hard-line vote, but it was only on Wednesday that one of them, Mohsen Rezaei, decided to withdraw.

Security forces were on high alert, but there were no immediate reports of unrest or violence. Last Sunday, a bomb killed eight people in the southwestern oil city of Ahvaz.

"This is more than just who will be president," said Saeed Hajjarian, a top adviser to outgoing President Khatami. "This is how Iran will proceed in a very delicate time for this region."

More than 20,000 police were deployed around Tehran for the vote and large security contingents were posted in other major cities. A previously unknown pro-Arab group claimed responsibility for blasts in Ahvaz on the Iraqi border. Two others died in explosions in Tehran the same day, but there's been no claim of responsibility.

Also, about 12,000 Iranians living in Iraq are expected to vote Friday in their country's crucial presidential elections, Iranian diplomats said.

"We are expecting a big turnout today." said Saeed Khalil Sadati Amin, a diplomat at the Iranian Consulate in Basra, 340 miles southeast of Baghdad.

Basra is Iraq's second-largest city and is home to about 3,000 Iranians. Most are women married to Iraqis who had been expelled by Saddam Hussein. The rest are businessmen.