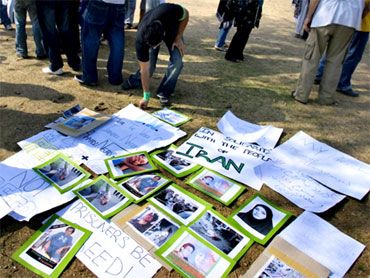 Iran's police chief acknowledged Sunday that protesters detained in post-election unrest were abused in custody but said the deaths of prisoners were caused by illness, not torture.

More troubling for the government, however, is that some prominent figures in its own conservative support base also say murders were committed in the prison.

Authorities also fired the head of the prison for "mismanagement" and three guards at the facility were detained on charges of mistreating detainees. Human rights groups have identified at least three protesters they say died after being detained at Kahrizak.

Gen. Ismail Ahmadi Moghaddam, Iran's police chief, acknowledged protesters were beaten by their jailers at Kahrizak, but said an outbreak of disease was to blame for deaths.

Protesters "died of viral illness and not as a result of beating," he added, according to another news agency, the semiofficial Fars.

At least 30 people have died in the unrest that followed the disputed election, according to figures from a parliamentary investigation. Hundreds have been detained. Human rights groups believe the death toll is likely far higher.

The opposition says Ahmadinejad won the election through fraud and that the pro-reform candidate, former Prime Minister Mir Hossein Mousavi, is the rightful winner.

A senior commander of Iran's powerful Revolutionary Guard is calling for the arrest and trial of
opposition leader Mir Hossein Mousavi and former President Mohammad Khatami over the postelection unrest.

The official IRNA news agency quotes Yadollah Javani as saying that the two reformist figures have led what he called a "velvet coup" aimed at toppling Iran's clerical rulers.

According to Sunday's report, Javani said the two men and another reformist who ran for president, Mahdi Karroubi, should be brought before judicial and intelligence officials.
By Associated Press Writer Ali Akbar Dareini