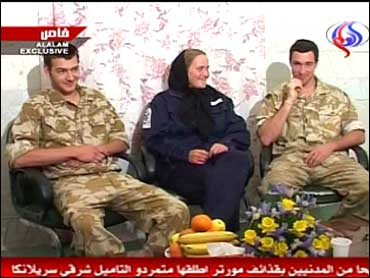 
As the standoff between Iran and Great Britain enters its second week, concern is growing over how and when the situation will be resolved. For now, efforts to bring an end to the growing crisis have been limited on both sides to behind-the-scenes diplomatic efforts and public rhetoric aimed at bolstering each side's demands for the other side to admit it was the offending party.

Caught in the middle of course are the 15 British sailors and marines who were seized by Iranian naval forces in disputed waters separating Iraq and Iran. The Iranians have shown video of the detained personnel and released several letters allegedly written by the only female member of the group, Faye Turney. Another detainee, Nathan Summers, is shown in the video saying, "I would like to apologize for entering your waters without any permission. ..."

Tehran seems intent on having the British admit responsibility for what they see as a border violation. But the British have decried the use of their military personnel for propaganda purposes. Prime Minister Tony Blair has said, "What the Iranians have to realize is that if they continue in this way they will face increasing isolation."

Blair's reference to Iran's position on the world stage may be at the root of the problem. It doesn't help that there is a fairly broad disconnect between President Mahmoud Ahmadinejad and other political elements inside Iran. But the extent of that problem is difficult to judge (although many other countries, including the United Kingdom, have diplomatic relations with Tehran, Washington does not).

Whether Iran is trying to make the point that — even after being slapped with two U.N. sanctions resolutions over its nuclear weapons program — it still has the capability to cause problems for the international community, or whether it reasoned that detaining these sailors and marines might gain it some leverage in its efforts to win the release of five Iranians held by the Americans in Iraq, is unclear. The whole situation may have come about simply because Iranian or British naval commanders misread the nautical location of their personnel. (A GPS glitch?)

At this point it almost doesn't matter; the question now is how the situation will be resolved.

The U.S. has two carrier battle groups conducting naval exercises in the Persian Gulf now; that's a lot of firepower. British naval forces of course are there, too. Although these forces are in international waters, this is literally Iran's front yard. A simple mistake by one side or the other could lead to a rapid military escalation of an already tense situation.

Add to this mix the question of shipping oil and petroleum products in and out of the Strait of Hormuz, and what is now a small boundary dispute could easily become a major world flashpoint.

For its part the U.N. Security Council could barely muster agreement for its lowest form of protest, a so-called press statement expressing "grave concern" at the "capture" and continuing "detention" of the 15 British service members.

The Bush administration is taking a low-key approach, very much staying in the background. Although fully supportive of its British allies, it is letting the Brits handle what is a matter between London and Tehran. However, no one in Washington can forget America's own hostage experience with Iran, one that took 444 days to resolve. Given the current, rancorous state of America's relationship with Iran, staying in the background is probably the best thing Washington can do to help defuse the situation.

One somewhat positive note is that a similar standoff between Iran and the U.K. took place in 2004; then, it took only three days for Iran to return eight British servicemen. That of course was before Ahmadinejad came to power — and before Iran came under U.N. sanctions. With the fate of the 15 British sailors and marines in the hands of Iran's Revolutionary Guards and not the Foreign Ministry, we may be in for a prolonged standoff. Unfortunately, like most other dealings with Iran, too little is really known to make serious predictions about an outcome.