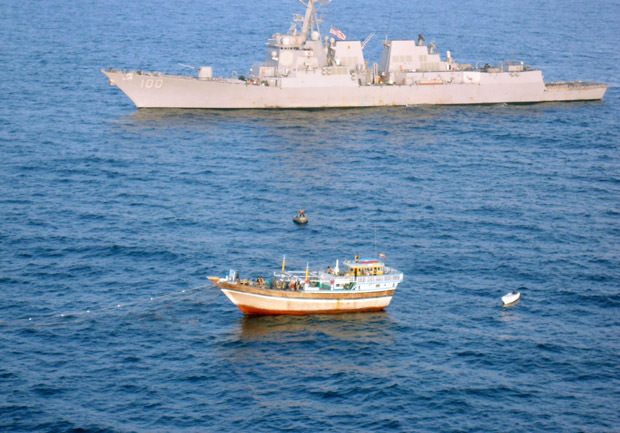 U.S. officials announced Friday that the fishermen had been rescued by a U.S. Navy destroyer on Thursday, more than 40 days after their boat was commandeered by suspected Somali pirates in the northern Arabian Sea. The rescue came just days after Tehran warned the U.S. to keep the same group of warships out of the Persian Gulf in a reflection of Iran's fear that American warships could try to enforce an embargo against Iranian oil exports.

"The rescue of Iranian sailors by American forces is considered a humanitarian gesture and we welcome this behavior," Foreign Ministry spokesman Ramin Mehmanparast was quoted as saying by state TV's Al-Alam Arabic channel.

Iran's hard-line Fars news agency had a different take, calling the rescue operation a Hollywood dramatization of a routine event.

The Fars report noted that attacks by Somali pirates in the region are common and said that Iran's navy has itself freed many mariners held by pirates in recent years without seeking to highly publicize it.

Amid escalating tension with Iran over its nuclear program, the Obama administration reveled in delivering Friday's announcement and highlighted the fact that the rescuing ships were the same ones Iran's army chief had just said were no longer welcome in the Persian Gulf.

"Basically, rescuing trading and fishing boats from the hands of pirates in the Arabian Sea and the Gulf of Aden is considered a completely normal issue," Fars said. "A U.S. helicopter filming the rescue operation from the first minute makes it look like a Hollywood drama with specific locations and actors. It shows the Americans tried to publicize it through the media and present the American warship as a savior."

Fars reported in April that Iranian naval commandos had driven off pirates attempting to hijack a supertanker off Pakistan's southwestern coast.

"Iran's navy has rescued various foreign ships from the hands of pirates ... but never publicized that," it said.

Naval forces from several countries patrol shipping lanes in the region in pursuit of Somali pirates. The pirates, who are after huge ransoms, have dramatically expanded their range in recent years and targeted some of the largest vessels to take to the seas, including oil supertankers.

The episode occurred after a week of tough talk from Iranian leaders, including the statement that American vessels were no longer welcome in the Gulf. Iran also warned it could block the Strait of Hormuz, the strategic waterway through which a sixth of the world's oil flows to market.

The Iranian threats, which were brushed aside by the Obama administration, were in response to strong economic sanctions against Iran over its disputed nuclear enrichment program. A week ago, President Barack Obama signed into law new sanctions targeting Iran's central bank and its ability to sell petroleum abroad.

At the same time, Iran has sought to project its naval power, carrying out 10 days of military drills at sea near the strategic Strait of Hormuz.

On Saturday, Iran's Revolutionary Guard began new war games near the Afghan border, according to the Guard's website, sepahnews.com.

Iran is also planning new military exercises near the Hormuz Strait next month.