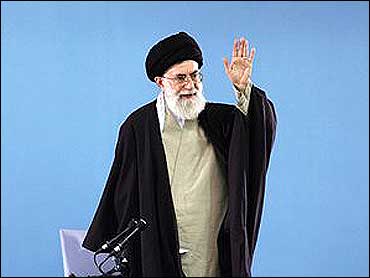 Iran's top leader, Ayatollah Ali Khamenei, warned on Sunday that energy shipments from the Gulf region would be disrupted should Iran come under attack from the U.S., insisting that Tehran will not give up its right to produce nuclear fuel.

"If you make any mistake [invade Iran], definitely shipment of energy from this region will be seriously jeopardized. You have to know this," Khamenei said in a speech broadcast live on state-run radio.

Khamenei also warned that, should a disruption occur, the U.S. and its allies would not be able to provide security to all the oil shipments that cross the strategic Strait of Hormuz - through which much of the world's oil supply must pass, within close range of Iran.

"You will never be able to protect energy supply in this region. You will not be able to do it," he said, addressing the West.

Khamenei, however, did not specify how oil supplies would be disrupted, and insisted Iran would not start any war. "We won't be the initiator of war," he said.

Iran is of the world's fourth largest oil exporter and second biggest power within the Organization of Petroleum Exporting Countries. Iranian officials have repeatedly ruled out using oil as weapon in the nuclear standoff with the West.

The supreme leader's harsh rhetoric came a day after Iranian President Mahmoud Ahmadinejad said a breakthrough in negotiations over Tehran's contentious nuclear program was possible and welcomed unconditional talks with all parties, including the United States.

Ahmadinejad said late Saturday that his government would not rush to judge an incentives package offered by Western countries to persuade Iran to cease enriching uranium.

Underlining his point, the president said "the Iranian nation won't give in to talks that contain threats or conditions that seek to deprive our definite right."

In a rare show of optimism, the Iranian Foreign Minister said earlier on Saturday that a breakthrough was possible. Tehran, he said, would welcome unconditional talks with all parties, including the United States.

"We think that if there is good will, a breakthrough to get out of a situation they have created for themselves... is possible," Manouchehr Mottaki told a news conference.

Khamenei appeared to be taking a tougher line Sunday.

"That a country has no right to achieve proficiency in nuclear technology means it has to beg a few Western and European countries for energy in the next 20 years," he said. "Which honest leader is ready to accept this?"

President Ahmadinejad has however repeatedly questioned Israel's right to exist and said the country should be wiped off the map.

"We have no target to use a nuclear bomb. It's against Islamic teachings," Khamenei insisted Sunday.