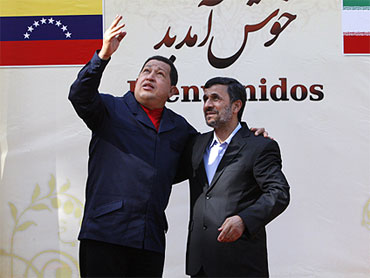 The leaders of Iran and Venezuela hailed what they called their strong strategic relationship on Wednesday, saying they are united in efforts to establish a "new world order" that will eliminate Western dominance over global affairs.

Among the agreements, Venezuela's state oil company Petroleos de Venezuela SA said the South American country was forming a joint shipping venture with Iran to aid in delivering Venezuelan crude oil to Europe and Asia. It said in a statement that the agreement for a joint venture also would help supply Iran "due to its limited refining capacity."

Both presidents denounced U.S. "imperialism" and said their opponents will not be able to impede cooperation between Iran and Venezuela.

Iran's state TV quoted both Ahmadinejad and Chavez as calling their relationship a "strategic alliance" that would eliminate the current global order.

"Iran and Venezuela are united to establish a new world order based on humanity and justice," Ahmadinejad said, repeating his predictions that those who today seek "world domination are on the verge of collapse."

Chavez said this is a time of "great threats" that make its necessary to swiftly "consolidate strategic alliances in political, economic, technological, energy and social areas," according to the state-run Venezuelan News Agency.

Details of the latest accords were not released, and Chavez said some agreements went beyond those put on paper. He said a Venezuelan delegation will soon travel to Iran to follow up on the agreements.

Iran has become the closest Middle East ally to Chavez's government as the left-leaning leader has sought to build international alliances to counter what he sees as U.S. economic and political dominance.

"Imperialism has entered a decisive phase of decline and ... is headed, like elephants, to its graveyard," Chavez said, according to the Venezuelan state news agency.

Chavez has staunchly defended Iran's nuclear energy program, siding with Tehran by insisting it is for peaceful uses and not for nuclear bombs.

U.S. officials have worried Iran may be using its civilian nuclear program as a cover to develop atomic weapons. Four rounds of U.N. sanctions, as well as broader severe U.S. and European Union sanctions have not persuaded Tehran to halt the program.

Chavez also has plans to develop a nuclear energy program in Venezuela and last week signed an agreement for Russia to help build a reactor.

Without mentioning the countries' nuclear ambitions, Chavez said his government demands respect for Iran's sovereignty and that "those who think they are most powerful and want to impose their will on the world respect Iran."

Chavez's trip to Iran was his ninth as president. Before coming to Tehran, he made stops in Russia, Belarus and Ukraine. Later Wednesday, Chavez arrived in Syria, and is due to travel next to Libya and Portugal.

Iran and Venezuela both belong to the Organization of the Petroleum Exporting Countries. In recent years, the two oil-producing countries have also set up joint ventures to produce cars, tractors and bicycles in the South American country.