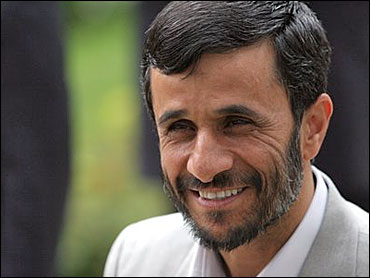 Iran's President Mahmoud Ahmadinejad said Thursday that his country is ready to discuss "mutual concerns" over its nuclear program and claimed the West had given in to the will of the Iranian nation.

Ahmadinejad did not say whether Iran accepted a Western proposal for resuming negotiations that demands Tehran suspend uranium enrichment in return for a package of incentives.

"On behalf of the Iranian nation, I'm announcing that the Iranian nation will never hold negotiations about its definite rights with anybody, but we are for talks about mutual concerns to resolve misunderstandings in the international arena," Ahmadinejad told thousands of people in Qazvin, west of the capital Tehran.

"The united strategy of negotiation, rather than confrontation, appears to have been met with a cautiously positive response from Iran," said CBS News foreign affairs analyst Pamela Falk from the U.N. "The negotiations are on-going but the framework of a plan appears to have, for now, diffused the confrontation."

Diplomats and officials say world powers are prepared to compromise on a long-standing demand that Iran commit to a prolonged moratorium on uranium enrichment and now are asking only for suspension during talks on Tehran's nuclear program.

That proposal — and a connected offer to allow Iran to continue with uranium conversion, which is linked to enrichment — was the latest in a series of concessions meant to entice Iran into starting talks and to defuse the possibility of U.N. sanctions if it remains defiant.

Such changes to the previous stance on enrichment signal a possible readiness by the United States and key allies to accept some limited form of the activity, despite years of warnings from Washington that Tehran was seeking the technology to make nuclear arms.

Iran's initial reaction to the package was relatively upbeat with Iran's top nuclear negotiator Ali Larijani saying the proposals included "positive steps" and "ambiguities that need to be cleared up."

Ahmadinejad did not specifically comment on the incentives. Tehran has said that it will only announce its position after carefully studying the package.

"International monopolists (the U.S. and its allies) have been defeated in the face of your resistance and solidarity and have been forced to acknowledge your dignity and greatness," Ahmadinejad told the crowd.

Meanwhile, the Chinese and Iranian presidents will discuss the Iranian nuclear dispute during a separate meeting next week in Shanghai on the sidelines of a regional summit, the Chinese foreign ministry said Thursday.

Since talks between key European nations and Iran broke off in August, the public stance by the European negotiators and the United States has been that Iran must commit to a long-term moratorium as a precondition for talks.

Still, one of the diplomats said Wednesday that — despite the concession — a long-term moratorium remained the preferred goal of the six nations that approved the package last week in Vienna.

EU foreign policy chief Javier Solana — who formally presented the offer to Iranian officials this week — said Wednesday that the issue of enrichment would have to be reassessed once talks were completed.

"In principle ... they will have to stop now, we will have to negotiate with no process of enrichment in place," he told reporters in the German city of Potsdam. "After the finalization of the negotiations we will see what happens."

Solana said the incentive offer came with "no specific timeframe," but that he expected an answer from Iran within "weeks."

He said nothing about conversion. But diplomats told The Associated Press on condition of anonymity that Iran would be allowed to continue with that activity — a precursor to enrichment — under terms offered Tehran in an attempt to bring it to the negotiating table. Previously, Washington and its allies also had called for a freeze on conversion.

In Washington, U.S. State Department spokesman Sean McCormack said suspension was a precondition for the talks, adding: "Beyond that, I am not going to speculate. Beyond that, we are truly into the realm of the hypothetical and theoretical."

France warned Wednesday that Iran would face U.N. sanctions if it rejects the incentives. But Russian Foreign Minister Sergei Lavrov said Moscow would support sanctions only if Iran violates the Nuclear Nonproliferation Treaty — a possible indication of continued discord among the six powers endorsing the Iran package of rewards.

Diplomats had said that both Russia and China agreed to possible sanctions during the Vienna talks on the package if Iran rejected the initiative.

Diplomats have told AP that Germany, which participated in drawing up a six-nation package of perks and punishments meant to persuade Iran to stop enriching uranium, has been advocating that Tehran be allowed some small-scale activity.

Mohamed ElBaradei, the head of the Vienna-based International Atomic Energy Agency, has backed that view, arguing that with Iran already successful in small-scale enrichment, it was unlikely to give up its right to such activities.

Iran announced April 11 that it had enriched uranium for the first time, using 164 centrifuges. Still, the country would need tens of thousands of centrifuges to produce adequate fuel for a nuclear reactor or material for a warhead.