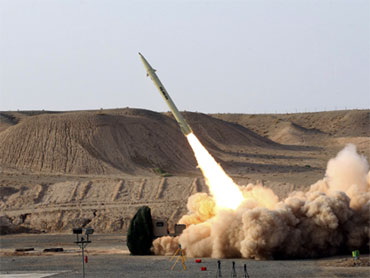 Iran said Wednesday that it has successfully test-fired an upgraded version of a short-range surface-to-surface missile.

Defense Minister Gen. Ahmad Vahidi said the third generation of the Fateh-110, which means "conqueror" in Farsi and Arabic, is equipped with a high accuracy guidance control system. He said the solid-fuel missile was developed domestically by Iran's Aerospace Industries Organization and tested Wednesday.

The new version of the missile increases the weapon's range from earlier generations, Vahidi said without providing any further details. Earlier versions of the Fateh-110, which Iran has had for several years, could strike targets up to 120 miles (193 kilometers) away.

"Employing a highly accurate guidance and control system has enabled the missile to hit its targets with great precision," Vahidi was quoted by state TV as saying Wednesday.

State TV broadcast footage of the missile being fired and then hitting a target on the ground. Iran's English-language Press TV said the missile is 30-feet (9-meters) long and weighs 7,700 pounds (3,500 kilograms).

The upgraded version of Fateh-110 will be handed over to Iran's armed forces late September, Vahidi said.