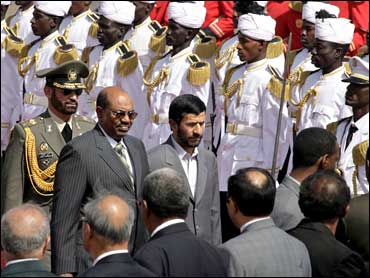 Iranian President Mahmoud Ahmadinejad arrived in Sudan on Wednesday for talks between two leaders who face strong U.N. Security Council pressure — Iran for its nuclear program and Sudan for the conflict in Darfur.

Ahmadinejad was met at Khartoum airport by Sudanese President Omar al-Bashir, a day after the International Criminal Court's chief prosecutor accused a junior member of al-Bashir's Cabinet of committing war crimes and crimes against humanity in Darfur.

During his two-day visit, Ahmadinejad will deliver a lecture at a private institution in Khartoum and witness the signing of several bilateral agreements, according to Sudan's Information Ministry.

The permanent members of the U.N. Security Council and Germany are currently discussing strengthening the limited sanctions imposed on Iran in December for its refusal to stop enriching uranium. Enriched uranium is used to fuel nuclear reactors but uranium enriched to a higher degree is used to make atomic bombs.

The United States accuses Iran of secretly trying to build nuclear weapons. Iran denies this, saying its enrichment is solely for self-sufficiency in fuel for nuclear power plants.

The United Nations is pushing the Khartoum government to accept 22,000 U.N. and African Union peacekeepers in Darfur, where 2.5 million people have become refugees and more than 200,000 have died in four years of fighting. Al-Bashir has rejected any significant U.N. deployment as a violation of sovereignty.

On Tuesday, the ICC chief prosecutor accused Sudan's minister of state for humanitarian affairs, Ahmed Muhammed Harun, of paying and recruiting militias responsible for murder, rape and torture in Darfur.

Harun, who is known to be a member of al-Bashir's inner circle, is alleged to have committed the crimes while a junior interior minister.

Sudan rejected the allegations and said it would not hand the suspects over for trial.