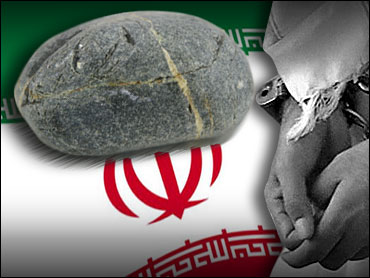 In a rare confirmation, Iran on Tuesday said a man convicted of adultery was stoned to death last week in a village in the northern part of the country, Iran's judiciary spokesman said.

Jafar Kiani was stoned to death in Aghchekand village, 124 miles west of the capital, Tehran, on Thursday, Ali Reza Jamshidi told reporters. It was the first time in years that Iran has confirmed such an execution.

"This verdict was carried out Thursday," Jamshidi told reporters.

Death sentences are carried out in Iran after they are upheld by the Supreme Court. Under Iran's Islamic law, adultery is punishable by stoning.

Jamshidi didn't elaborate on how the stoning was carried out, but under Islamic rulings, a male convict is usually buried up to his waist while a female criminal is buried up to her neck with her hands also buried.

Those carrying out the verdict start throwing stones and rocks at the convict until he or she dies.

International human rights groups have long condemned stoning in Iran as a "cruel and barbaric" punishment.

"The execution has apparently gone ahead despite Iran's moratorium on execution by stoning, a moratorium that had been in effect since 2002," said Jose Diaz of U.N. High Commissioner for Human Rights.

"Stoning is in clear violation of international law," Diaz said Tuesday in Geneva. He said Arbour considered stoning to be a form of cruel, inhuman or degrading treatment or punishment that is prohibited under an international treaty which Iran has signed.

Gahr Stoere was "deeply upset" that the death penalty had been carried out and called stoning an "inhumane and barbaric method of punishment," Foreign Ministry spokesman Frode Andersen said in Oslo.

The reported execution comes two weeks after international pressure, including protests from Norway, caused Iranian officials to delay carrying out the sentence against Kiani and his female companion, Mokarrameh Ebrahimi, who also was sentenced to death by stoning. It was not known if a date had been set for her execution.

The couple had reportedly been imprisoned for 11 years.

Stoning was widely imposed in the early years after the 1979 Islamic revolution that toppled the pro-Western Shah Mohammad Reza Pahlavi and brought hard-line clerics to power. But in recent years, it has rarely been applied, though the government rarely confirms when it carries out stoning sentences.

There is no official report of the last time Iran stoned someone to death, but there were unconfirmed media reports that a couple was stoned in 2006 in Mashhad, located in northeastern Iran.

A group of women's rights activists headed by feminist lawyer Shadi Sadr have been campaigning to have the sentence removed from Iran's statute books.

In the past years, Iran's reformist legislators demanded an end to death by stoning as a punishment for adultery, but opposition from hard-line clerics sidelined their efforts.