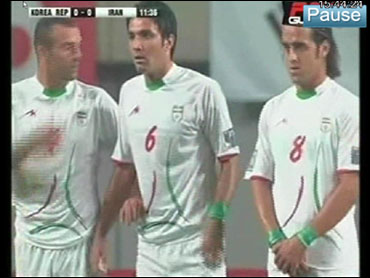 (CBS/Twitpic.com)
A number of Twitter users had said today that members of Iran's national soccer team were wearing green wristbands - an apparent show of solidarity with the opposition movement headed by Mir Hossein Mousavi.

The team played South Korea in Seoul Wednesday in a World Cup qualifier match. We found the image at left, apparently taken from Iranian TV during the match, on Twitpic.com.

Just like anything else on a social networking site, we can't verify that the picture shows what it says it shows... It is not clear how many of the players wore the green bands, and it is impossible to be sure they did so in support of Mousavi's movement.

Multiple Tweeters reported the wristbands being worn. Someone said the players were made to remove them at halftime.

CBS News correspondent Elizabeth Palmer reported from Tehran Wednesday that the government had managed to block all access to Twitter, Facebook and MySpace inside the country.