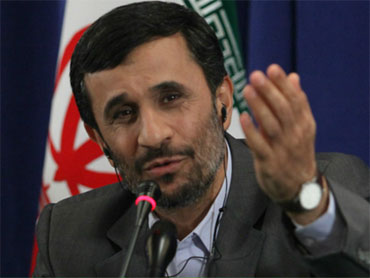 Iran said on Tuesday it was ready to send its uranium abroad for further enrichment as requested by the U.N.

President Mahmoud Ahmadinejad announced the decision in an interview with state Iranian television.

He said Iran will have "no problem" giving the West its low-enriched uranium and taking it back several months later when it is enriched by 20 percent.

The decision could signal a major shift in the Iranian position on the issue.

"Iran is clearly feeling the heat - and the response is to make concessions on both its nuclear program and on the U.S. nationals in custody in Iran," said CBS News foreign affairs analyst Pamela Falk, referring to Ahmadinejad's announcement that he would swap imprisoned U.S. hikers in exchange for Iranians in U.S. prisons.

Still, it was unclear how much of a concession the Ahmadinejad comments represented, even though he appeared to be saying for the first time that Iran was willing to ship out its enriched uranium and wait for it to be returned in the form of fuel for its Tehran research reactor.

But his time frame of four or five months appeared to fall short of the year that Western officials say it would take for Iran's enriched fuel to be turned into fuel rods for the reactor.

If that difference cannot be bridged, it could allow Iranian officials to assert that the deal failed due to Western foot-dragging, despite their readiness to accept the proposed formula of shipping out the bulk of their enriched uranium and waiting for it to be converted and returned as fuel.

"Although the Ahmadinejad proposal is short on details and appears to be on a different timetable than what was proposed by the International Atomic Energy Agency in October, Iran's offer is a concession to the West at a time when Iran's internal opposition is increasing and is the government's repression," Falk said.

Ahmadinejad also did not address whether his country was ready to ship out most of its stockpile in one batch - another condition set by the six world powers endorsing the fuel swap.

If Iran were to agree to export most of its enriched uranium in one shipment, it would delay its ability to make a nuclear weapon by stripping it of the material it needs to make the fissile core of a warhead.

Experts believe it would need at least a year to replenish its stockpile at its present rate of uranium enrichment.

For months, Iranian officials have used the media to criticize the plan and offer alternatives.

The West suspects that Iran's nuclear program is geared toward acquiring atomic weapons. Iran denies the charge and says the program is for the peaceful purpose of generating energy.

He dismissed concerns by what he called "colleagues" that the West would not return the uranium, saying Iran would respond to that by continuing to produce its own enriched uranium.

The plan for shipping the low enriched uranium abroad for treatment comes from the International Atomic Agency. It was first drawn up in early October in a landmark meeting in Geneva between Iran and the six world powers, and then refined later that month in Vienna talks among Iran, the U.S., Russia and France.

The talks in Vienna came up with a draft proposal that would take 70 percent of Iran's low-enriched uranium to reduce its stockpile of material that could be enriched to a higher level, and possibly be used to make nuclear weapons.

That uranium would be returned about a year later as refined fuel rods, which can power reactors but cannot be readily turned into weapons-grade material.

At the White House, spokesman Mike Hammer said the United States has made "a good faith and balanced offer regarding the Tehran research reactor" that makes sense for Iran and Western countries.

The foreign ministries of Britain, France and Germany said they had no immediate comment.

In Tuesday's interview, Ahmadinejad repeated his wish to see the West build nuclear power plants in his country. "They want to cooperate? OK, we cooperate. We do not have any problem. Let them build 20 nuclear power plants. Is there a problem? Russia, France and the U.S., come and build."

Iran is building with Russia's help its first nuclear power plant in the southern port city of Bushehr. The plant is scheduled to be inaugurated later this year.

The United States and its Western allies have been pushing for a fourth round of U.N. sanctions to be slapped on Iran over its disputed nuclear program. But with Russia, and especially China, skeptical of any new U.N. penalties, they have to tread carefully to maintain six power unity on how to deal with the Islamic Republic.

International concerns include Iran's refusal to heed U.N. Security Council demands that it freeze its enrichment program; fears that it may be hiding more nuclear facilities after its belated revelations that it was building a secret fortified enrichment plant, and its stonewalling of an IAEA probe of alleged programs geared to developing nuclear arms.