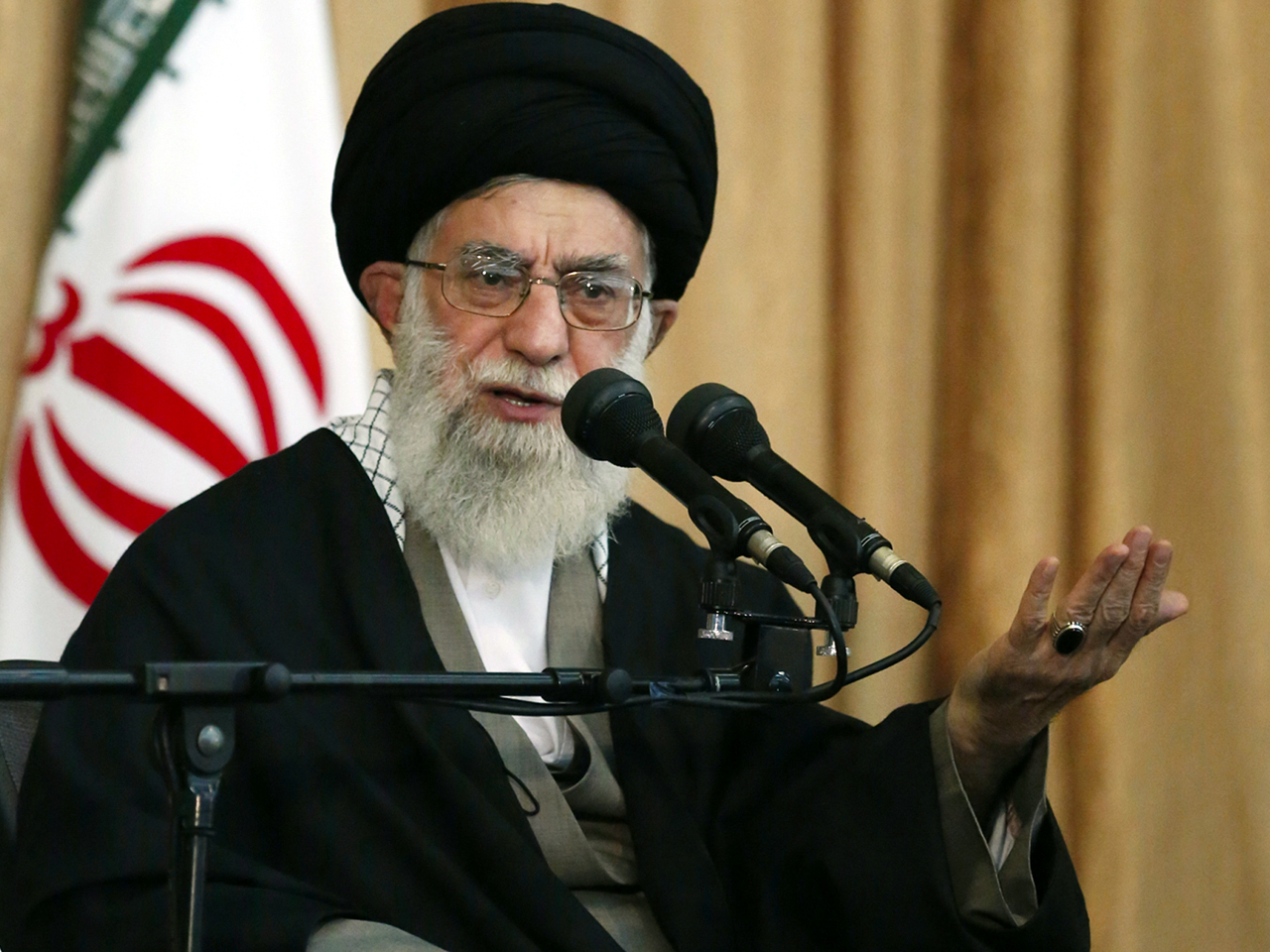 TEHRAN, Iran Iran sought Tuesday to spell out in its clearest terms yet that it is not seeking nuclear weapons, highlighting a religious decree issued by Supreme Leader Ayatollah Ali Khamenei that bans nuclear weapons.

The latest reference to Khamenei's declaration is seen as a bid to close the door on debates that Iran may have carried out atomic bomb trigger tests as inspectors from the U.N. atomic watchdog were on their way to Tehran for a new round of discussions.

Iran authorities have often cited Khamenei's religious edict, made more than seven years ago, in attempts to counter Western suspicion that Iran could be moving toward nuclear arms. But Iranian leaders now appear increasingly desperate to reopen talks with world powers as a possible way to ease sanctions.

Ministry spokesman Ramin Mehmanparast touched on a cultural rift between the Islamic Republic and the West, saying the United States and its allies don't understand the significance of the edict.

"There is nothing higher than the exalted supreme leader's fatwa to define the framework for our activities in the nuclear field," he told a press conference.

Mehmanparast could not be more definitive in dispelling suspicions that Iran may ultimately develop a nuclear weapon.

"We are the first country to call for a Middle East free of nuclear weapons," he said. When the highest jurist and authority in the country's leadership issues a fatwa, this will be binding for all of us to follow. So, this fatwa will be our top agenda."

Mehmanparast said Westerners "don't have an accurate understanding of Islamic beliefs and fatwas issued by great scholars," suggesting that the U.S. and its allies must take Khamenei's edit seriously.

To highlight its seriousness, he said Iran is willing to "register the fatwa as an international document."

Although Iran views Khamenei's 2005 fatwa as a binding declaration, the West and its allies have repeatedly accused Iran of using any tactic to prolong the standoff and possibly advance its nuclear capabilities.

The perception gap also strikes at the role of the supreme leader himself. The most ardent followers consider the post as divinely imbued and answerable only to God. For Iran's opponents, Khamenei is often seen as guiding a ruling system seeking to outwit the West and threaten Israel.

They want Iran to stop enriching uranium to a level that could be turned relatively quickly into the fissile core of nuclear arms. Iran denies such aspirations, insisting it is enriching only to make reactor fuel and to make isotopes for medical purposes.

Senior U.N. investigators trying for more than a year to restart a probe into Iran's alleged work on nuclear arms chose their words carefully Tuesday about hopes for success as they left for Tehran on a trip that sets the stage for separate talks between six world powers and the Islamic Republic.

Team leader Herman Nackaerts said the International Atomic Energy Agency hopes to "finalize the structured approach" that would outline what the agency can and cannot do in its investigation.

Yukiya Amano, the IAEA chief, has expressed doubt that Tuesday's trip would result in a deal, but Iran said it's optimistic.

"If there are any ambiguities or concerns, we are ready to clear these ambiguities. This can be done under a structured approach," he said.

Iranians say they have a bitter memory of allowing IAEA inspections and providing replies on a long list of queries over its nuclear program in the past decade. Now, Tehran says such queries should not be revived or remain open-ended once the IAEA has verified them.

Mehmanparast said Iran provided detailed explanations to IAEA questions on six outstanding issues in the past but instead of giving Iran a clean bill of health, the agency leveled new allegations on the basis of "alleged studies" provided by Iran's enemies.

Iran uses that term to refer to a list of questions including a dispute at Parchin, a military site southeast of Tehran, where the agency suspects Iran ran explosive tests needed to set off a nuclear charge.

Tehran has in the past allowed IAEA inspectors twice into Parchin but now it says any new agency investigation must be governed by an agreement that lays out the scope of such a probe.

"Obligations of the other party must be clearly specified. If a claim is to be raised on a spot in Iran every day and (the U.N. agency) seeks to visit our military facilities under such a pretext ... this issue will be unending," Mehmanparast said.

Iran says the agency's suspicions are based on forged intelligence from the United States, Israel and others, materials it has not been allowed to see.

Iranian leaders appear to be frustrated over the long investigations. Prominent lawmakers say Iran wants an end to the probe once and for all.

"We are interested to put an end to these ambiguities. We don't want a prolongation of this process," Alaeddin Boroujerdi, head of the parliament's security committee, said recently.

Iran is also linking its cooperation with the IAEA on Parchin to a commitment from the agency that Iran's nuclear dossier is referred back to Vienna from the U.N. Security Council.

Iran is under four sets of Security Council sanctions and stepped-up Western oil and banking sanctions over its refusal to halt uranium enrichment, a technology that can be used to produce nuclear fuel or materials that can be used for a warhead.

The trip and the planned Iran talks are formally separate but both IAEA officials and diplomats involved in the talks privately acknowledge an informal link.

By compromising on the IAEA probe, Iran could argue that the onus was now on the six powers to show some flexibility, temper their demands, and roll back U.S. and European sanctions that have hit Iran's critical oil exports and blacklisted the country from international banking networks.