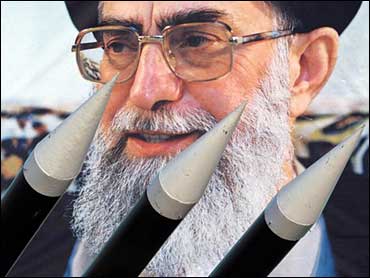 Iran on Sunday rejected a U.N. atomic watchdog agency resolution that would refer Iran to the U.N. Security Council over its disputed nuclear program as "political, illegal and illogical."

The 35-nation board of the U.N. atomic watchdog agency approved the resolution Saturday that could lead to Iran's referral to the U.N. Security Council for violating a nuclear arms control treaty, unless Tehran eases suspicions about its nuclear activities.

The resolution was adopted with 22 of 35 board nations supporting it, 12 abstaining and one rejecting it.

To avoid referral, diplomats said, Iran is being told to suspend all uranium enrichment activities including uranium conversion, give up construction of a heavy water nuclear reactor and give agency experts access to certain research and development locations and documentation.

Iran has repeatedly said it was permitted under the Nuclear Nonproliferation Treaty to pursue such activities for peaceful purposes and won't give up its right to enrich uranium to produce nuclear fuel.

In remarks suggesting increasing tension in Tehran-London relations, Mottaki said the rotating presidency of the European Union "is unable to manage the situation" and made decisions under U.S. pressure. Britain holds the current EU presidency.

"The EU3 (three European countries), through rendering this politically motivated, illegal and illogical resolution removed any final doubts that they are not committed to their obligations under agreements reached with Iran in the past 20 months," Mottaki said.

The decision represents a victory for Washington, which says Iran has nuclear weapons ambitions. For more than two years, the United States has failed to enlist board support to haul Iran before the council for alleged violations of commitments under the NPT.

IAEA chief Mohamed ElBaradei said the decision showed that "The international community is ... not satisfied with the level of confidence building measures Iran has so far taken."

The IAEA yet says there is no evidence pointing to an Iranian nuclear weapons program.

Board nations Russia and China, Security Council members with veto power, abstained from Saturday's vote, along with 10 other nations, all of them developing countries, diplomats said. Among those voting for the resolution were European countries on the board, along with the United States, Canada, Australia and Japan, the diplomats said, speaking anonymously because the information was confidential.

India, Peru, Singapore and Ecuador also backed the resolution, reflecting some support in the developing nations' camp, they said, and Venezuela cast the only vote against.

The resolution called on the board to consider reporting Iran at a future meeting. As grounds, it mentioned noncompliance with the Nuclear Nonproliferation Treaty and suspicions that Iran's nuclear activities could threaten international peace and security.

Diplomats from countries backing the resolution said it set Iran up for referral as early as November, when the board next meets in regular session, unless it dispels international concerns.

It was not yet clear if Iran will take any of the drastic measures it has threatened to do if the IAEA and Europeans adopt a threatening language.

Tehran had already warned that, if the resolution was approved, it could respond by starting uranium enrichment, a possible path to nuclear arms, and by reducing IAEA powers to inspect its activities under the additional agreement it had signed but not yet ratified.