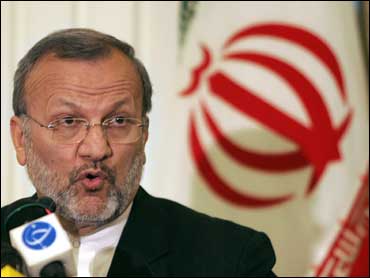 Iran's foreign minister on Thursday brushed aside demands from the major industrialized nations to respond by July 5 to an international offer for Tehran to roll back its uranium enrichment program, saying his nation would need until August.

Foreign Minister Manouchehr Mottaki said Iran had questions about the proposal that will be raised in talks expected early next month with Javier Solana, the European Union's foreign policy chief, and need to be answered so Tehran can respond in August.

"The Islamic Republic of Iran is seriously and carefully reviewing the proposed package," he said. "Questions and ambiguities on the Iranian side are pending. Therefore, we welcome the discussions and negotiations for clarification of those ambiguities."

Mottaki's remarks contradicted his own statements published Wednesday in the German weekly magazine Stern, which quoted him as saying his country may respond before the Group of Eight summit in St. Petersburg, Russia, which starts July 15.

Earlier Thursday, foreign ministers of the Group of Eight meeting in Moscow expressed disappointment at the absence of an official Iranian response to a package of incentives from key global powers to try to persuade Iran to roll back its uranium enrichment program, which can be used to produce nuclear energy or nuclear weapons.

The ministers from the United States, Russia, Britain, France, Germany, Japan, Italy and Canada said they expected to hear "a clear and substantive Iranian response to these proposals" at a meeting on July 5 between Solana and Iran's chief negotiator Ali Larijani.

Mottaki, asked about the Group of Eight request for a response by July 5, noted that when Solana presented the package to the Iranians in Tehran "we did not agree on any specific date to respond."

"Some of these ambiguities may be responded by Mr. Solana," Mottaki said, but some questions may need "a substantive response" from the six countries that drafted the incentive package, the United States, Russia, China, Britain, France and Germany.

The Larijani-Solana meeting would be the first since the EU official presented the incentive package to the Iranian negotiator in Tehran on June 6.

Mottaki's remarks echoed comments made by Larijani, who had said the proposals contained "positive steps" but talks were needed to clear up ambiguities.

Iranian President Mahmoud Ahmadinejad has also said the government will not respond officially until at least mid-August. Europe is pressing for a much quicker reply and U.S. Ambassador John Bolton had said the United States wanted a response before Thursday's Group of Eight ministerial meeting in Moscow.