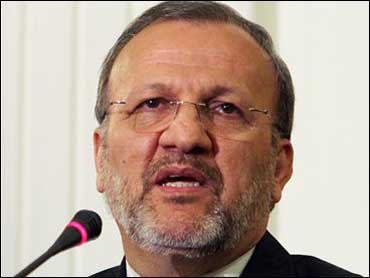 Iran finds parts of a Western incentives package aimed at making a breakthrough in the nuclear dispute "acceptable," but some other parts should be removed, a Foreign Ministry spokesman said Sunday.

Hamid Reza Asefi also said Iran is not stalling by taking time to respond to the package, which was presented to it last week and promises U.S. and European nuclear help if Iran suspends its uranium enrichment program.

U.S. President George W. Bush said on Friday that Iran will have weeks, not months to decide whether to accept the proposals or face the prospect of penalties.

Asefi insisted that "no deadline has been given. A deadline doesn't exist," but he added that Iran "is not seeking to buy time."

"We have to evaluate it. We will use our time as long as is necessary," Asefi said. "We will give our views in response to the package and we will offer our proposals."

Asefi did not elaborate on which parts he was referring to. But his comments reflected Iran's intention to seek changes in the offer. Iranian Foreign Minister Manouchehr Mottaki said Saturday that his country would present a counteroffer - either a various of the package or an entirely new proposal. He did not provide details on Iran's proposals or say when they might be presented.

The package put forward by the Big Five at the United Nations plus Germany aims to restart negotiations with Iran over its nuclear program.

It included some significant concessions by the United States aimed at enticing Tehran to freeze enrichment. The U.S. would provide Iran with peaceful nuclear technology, lift some sanctions and join direct negotiations with Tehran.

The package also pulls back from demands that Iran outright scrap its enrichment program as an initial condition for negotiations, seeking instead a suspension. However, it also contains the implicit threat of U.N. sanctions if Iran remains defiant.

When presented with the proposal's details on Tuesday, Iran said they contain "positive steps" but also ambiguities, which it said had to be cleared up in further talks. It said it would study the package before announcing its stance.

EU foreign policy chief Javier Solana, who presented the offer to Tehran, said he expected a reply within "weeks."

Iran has consistently refused to give up enrichment, a process that can produce either fuel for a nuclear reactor or the material for a nuclear warhead. Iran insists its program is peaceful and that it has the right to develop enrichment - though it has signaled it might compromise on large-scale enrichment.